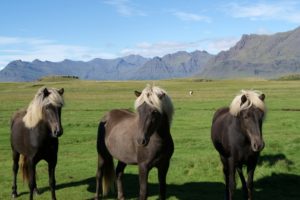 Iceland is beautiful in all seasons, and each season has a standout reason why you should visit. It is the land of ice, fire and deserts. From glaciers to geothermal hot springs, Iceland has a vast array of activities in any temperature. The average temperature in Reykjavik in spring hovers around 8ºC, in summer it’s around 12ºC. The average high temperature in the fall is around 9ºC and winter, the temperature goes down to an average high of 3ºC. Here is a list of why I like to visit Iceland in every season:

The weather has started to warm up, and the pricing is now considered shoulder so not as expensive as summer. The crowds haven’t started coming back yet, and the days are starting to get longer. Keep in mind though, spring tends to be a little wetter than other seasons. 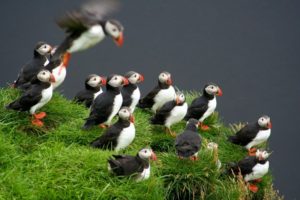 Summer (mid May to early September)

The midnight sun is one of the biggest draws. Almost 24 hours of true daylight messes with your mind and body but is a truly unique thing to experience. The highland roads have opened. These roads provide the only access to the elusive middle highlands of Iceland but are only accessible in summer (mid-June to late July/early August) due snow and road conditions.

The puffins also return in early/mid May, staying until mid-August. Wildflowers are out in bloom. Some of the best hiking in the world is in Iceland including the Landmannalaugar hike – best done in Summer as a lot of branches of this hike are not accessible any other time of the year.

Amazing for photography. Golden light in the afternoons/evenings is a photographer’s dream. Iceland gets its own version of fall colours and this is a great time to take that in. Most hotels and attractions consider this window as a shoulder season, and after about the first week of September the crowds from the summer months start to die down. Just like spring, fall tends to be the season where precipitation tends to occur more.

Winter (November to end of March)

Limited daylight can be a drawback, however, as a trade off, you get longer nights for hunting for the northern lights! The sunrises and sunsets are also quite spectacular in the winter as there is a clear distinction between night and day, which doesn’t happen all year. It isn’t as cold as you might think, in the south it is usually around 0 degrees Celsius (32 degrees Fahrenheit), however the damp winds coming of the north Atlantic can make it feel quite a bit colder. This is low season for hotels (except during Christmas/New Year’s which is considered High Season), so hotel pricing is significantly lower than in summer months. 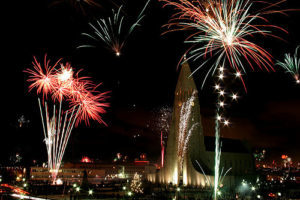 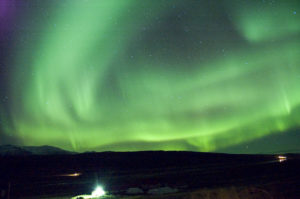 Whatever season you decided to visit, Iceland will definitely ignite some adventure in your soul. Contact our Iceland Specialists for more information.