On this tour you will visit two of the main centres for Inuit art in Canada’s Arctic, Cape Dorset and Pangnirtung. You will also have a chance to meet several of the artists and engage with them as you learn about the inspirations for the tremendous art they create.

Prices are “starting from” rates, shown in CA$, per person based on two people sharing a twin room. Single occupancy rates may be available on request.

Arrive into Ottawa anytime today and transfer on your own to the Hilton Garden Inn, situated close to the Ottawa Airport. Overnight.

Check in at least 90 minutes prior to your early morning flight north to Pangnirtung, with a short stop in the capital of Nunavut, Iqaluit.

Upon arrival, you will be picked up by the Auyuittuq Lodge for a 2-night stay with all meals included.

The Hamlet of Pangnirtung is located 236 km Northeast of Iqaluit, on Baffin Island. The name is derived from “the place of many bull caribou.” Pang, as it is known, has gained an international reputation for producing high quality sculptures, printmaking and weaving.

Spend the remainder of your day exploring the community with a visit to Angmarlik Visitor Centre to view the displays of Thule and modern Inuit, along with the local library and elder’s drop-in center on site.

The Thule were the ancestors of all modern Inuit. They developed in coastal Alaska by 1,000BC and expanded eastwards across Canada, reaching Greenland by the 13th century. In the process, they replaced people of the earlier Dorset culture that had previously inhabited the region. The appellation “Thule” originates from the location of Thule (relocated and renamed Qaanaaq in 1953) in northwest Greenland, facing Canada, where the archaeological remains of the people were first found at Comer’s Midden.

The links between the Thule and the Inuit are biological, cultural, and linguistic. Evidence supports the idea that the Thule (and also, to a lesser degree, the Dorset) were in contact with the Vikings, who had reached the shores of Canada in the 11th century.

Intensified contacts with Europeans began in the 18th century. Compounded by the already disruptive effects of the “Little Ice Age” (1650–1850), the Thule communities broke apart, and the people were henceforward known as the Eskimo, and later, Inuit.

After breakfast, you will enjoy a boating excursion from Pangnirtung  to Auyuittuq National Park, approximately 30km (1 hour). A zig-zag skyline of craggy granite peaks and glittering glaciers overlooks tundra valleys and steep-walled fiords whose winding waterways teem with narwhal and ringed seals, Auyuittuq is a diverse and grand-scale Arctic experience. Hike alongside icy, thundering streams and amid wildflower dotted meadows.

Once back in the community, visit local artist Andrew Qappik and the weave studio.

Andrew Qappik CM (born February 25, 1964 in Nunataq, Nunavut) is a Canadian Inuit graphic artist currently residing in Pangnirtung, Nunavut. Qappik is known for his printmaking. His prints depict both animals and traditional Inuit culture, which he has learned about from his own experience and stories from his grandfathers and other relatives. Some of these relatives have been an influence on Qappik’s artistic sensibilities. He has a fondness for realistic & naturalistic scenes of Arctic life; an instinctive grasp of line, form and composition; and a use of lighter colored tones with little negative space. Qappik’s works are published by the Pangnirtung Print Shop, under the auspices of the Uqqurmiut Centre for Arts & Crafts. He was made a Member of the Order of Canada in 2017 for his artistic contributions as well as the design of the Nunavut Flag and Coat of Arms.

Enjoy dinner at the lodge, with possible evening entertainment.

*One of these activities may be moved to Day 2.

After breakfast, check out of your accommodation as you will then be transferred back to the airport. Check in at least 90 minutes prior to departure with your valid identification.

Arrive into Cape Dorset and settle into your accommodations at the Dorset Suites. Supper with hosts followed by throat singer performance after dinner. Evening walk with local guide.

Cape Dorset was named after Edward Sackville, the 4th Earl of Dorset. It is located on Dorset Island, a short distance from the southwest coast of Baffin Island. The Hudson’s Bay Company established a trading post there in 1913, where they traded furs for supplies such as rifles, ammunition, flour, tea and sugar. The community was incorporated as a hamlet in 1982 and is now widely-known by its Inuktitut name, Kinngait.

Cape Dorset has come to be described as the most artistic community in Canada, with some 22% of the labour force employed in the arts. Since 1957, Kinngait Studios has published an annual print collection that is marketed internationally.

Enjoy breakfast at your hotel before making a short journey to the ancient Dorset archeological sites at nearby Mallikjuaq Territorial Park, including a tundra walk and photography tips. Mallikjuaq means ‘big wave’ in Inuktitut, an appropriate name for an island where rounded rock hills and low tundra valleys resemble giant rolling waves. While Mallikjuaq derives its name from its topography, its spirit comes from its ancient human history. Located conveniently close to the community of Cape Dorset, at Mallikjuaq Territorial Park visitors can view some excellent archaeological sites with ancient and historical stone structures, some of which date back three millennia.

At first glance, Mallikjuaq Island and Dorset Island seem barren yet they sustain many forms of arctic life. In July, wildflowers dapple the tundra with vivid colors and migratory birds return for the nesting season. Local Inuit travel to hunting camps along the shorelines of these islands at that time. The trails of Mallikjuaq Island and Dorset Island lead to these special places. Visitors can hike through gentle hills to crystalline lakes or relax in the sunshine along the shore.

Enjoy breakfast at your hotel before heading out on a tour of the Kenojuak Cultural Centre and Print Shop and seeing a print demonstration. The Kenojuak Centre is where Cape Dorset artists create their incredible art. Over the past half-century, the bold and imaginative prints of the Cape Dorset Inuit have become recognized as some of the finest art in the world. Spend time with the local artists and enjoy a print demonstration.
After picking up some souvenirs, you will be transferred back to the airport for your afternoon flight.

Upon arrival into Iqaluit, we have arranged transfers from our local outfitter for a 90-minute community tour. This tour will be followed by hotel check in at the Frobisher Inn. The evening will continue with a transfer to Sylvia Grinnell Park where we will enjoy a group dinner with traditional food, fire pit and storytelling.

Iqaluit, meaning “place of fish”, is the capital of the Canadian territory of Nunavut, its largest community, and its only city. It was known as Frobisher Bay from 1942 to 1987, after the large bay on the coast of which the city is situated, before the traditional Inuktitut name was restored. Iqaluit became the capital of Nunavut after the division of the Northwest Territories into two separate territories in 1999.

Before this event, Iqaluit was a small city and not well known outside the Canadian Arctic or Canada, with population and economic growth highly limited. This is due to the city’s isolation and heavy dependence on expensively imported supplies, as the city, like the rest of Nunavut, has no road, rail, or even ship connections for part of the year to the rest of Canada.

The city has a polar climate, influenced by the cold deep waters of the Labrador Current just off Baffin Island; this makes the city of Iqaluit cold, although the city is well south of the Arctic Circle. As of the 2016 census, the population was 7,740 (Population Centre: 7,082), an increase of 15.5 percent from the 2011 census. Iqaluit has the lowest population of any capital city in Canada. Inhabitants of Iqaluit are called Iqalummiut.

Free day to enjoy the capital of Iqaluit. Visits may include the Unikkaarvik Visitors Centre, Nunatta Sunakkutaangit Museum and the Legislative Assembly. Hours of operation are normally 1 – 5pm 4 days per week.

Today, you will check out of your accommodation and will be transferred back to Iqaluit Airport. Please check in at least 90 minutes prior to your departure with your valid identification.

Our flight back to Ottawa will arrive mid-afternoon, allowing a connection to late afternoon and evening flights. If you are unable to fly back to your home city today we can add on another night in Ottawa, pricing on request.

This escorted tour may also be customized for small, private groups. If you are interested in this, or a similar itinerary, please ask us for a quote. 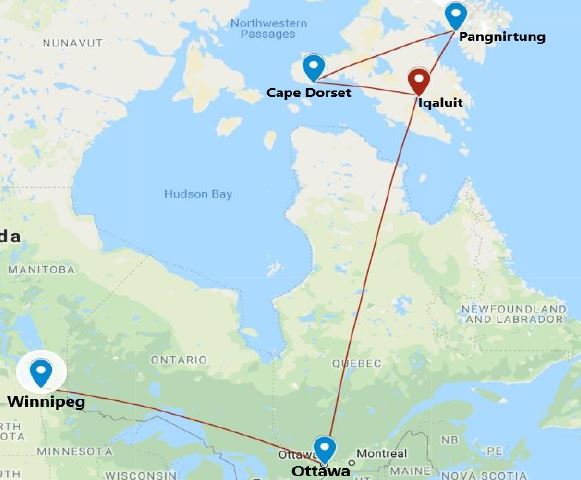