Realm of the Polar Bear – The Great Canadian Travel Co.
Skip to content

Realm of the Polar Bear

A Jane Goodall Collection program. Roaming polar bears, lounging seals, grazing reindeer, and colonies of birds all co-exist in the harsh lands of Svalbard, an area we dare only to explore a few months of the year.

Prices are “starting from” rates, shown in Canadian $, per person based on three people sharing a triple or two people sharing a twin. Single prices are offered in all cabin categories, depending on availability. Please inquire for the travel date of your choice and we will quote you the applicable price. Different rates may apply for residents of countries other than Canada, as set by the cruise company.

Arrive into Longyearbyen today, no later than 2:00pm. Transfer from the airport to the Radisson Blu Polar Hotel. All passengers will be transferred to the ship as a group for embarkation, departing from the hotel at 4:00 pm. Please ensure that for embarkation you have your passport accessible (not in your luggage which is being transferred separately to the ship).

If you are staying for the night pre-cruise please make sure you drop your checked luggage off at the Radisson Blu Polar Hotel between 09:00 – 13:00. A local representative will be in the luggage storage room. They can provide general information about the town or your embarkation process.

Get your first glimpses of the midnight sun in Spitsbergen’s capital Longyearbyen. Embark the M/S Expedition in the afternoon and depart Longyearbyen in the evening.  Meals: (D)

From close-up encounters with icebergs and glaciers to the region’s plentiful wildlife, this is a voyage of non-stop highlights. Always on the lookout for exotic animals, you’ll explore this landscape not only by ship but also on foot and via Zodiac.

Spend time on deck searching for polar bears and whales, cruise through breathtaking fjords and admire massive glaciers, experience the midnight sun, learn about Arctic history and ecology from our expert guides, brave the Arctic waters and take a polar plunge, enjoy the silence of the Arctic tundra.

Each day will be planned to take advantage of local ice and weather conditions. Svalbard is one of the few places on the planet to offer such a plethora of natural and historical extravaganzas. We will spend the next seven days exploring the remote polar regions. Visit ice covered fjords with breathtaking mountain scenery and glaciers crashing into the sea around us. Spend time steaming through the ice in search of roaming polar bears, lounging seals and colonies of bird. At one or more of the stops, we hope to see Svalbard’s species of reindeer.

Some years it is possible to sail through the Hinlopen Strait to attempt a circumnavigation of the archipelago, while other years there is a great deal of ice, which makes it harder to navigate around. We recommend the early tours for those who are keen to see large ice floes and the richest bird life. For those who would rather travel further east with the chance to sail around Spitsbergen, we recommend a tour later in the season. The final itinerary is dependent on ice and weather conditions, which have to be constantly assessed during the voyage.

Visit ice-covered fjords with breathtaking mountain scenery and glaciers. Spend time exploring the natural wilderness searching for polar bears hunting seals. Look out for arctic foxes or Svalbard’s unique reindeer. Our goal is to give travellers the best possible opportunity to see wildlife in and around the Svalbard archipelago. Depending on ice conditions, explore different areas of the archipelago.

Early-season voyages often provide the greatest opportunity to see large ice floes in the Arctic pack ice, which usually means excellent wildlife viewing. Later in the season, the group can cover more territory, which may allow the chance to explore the entire archipelago. This can lead into the less explored regions of Nordaustlandet and Kvitøya, or the continental edges where large whales are attracted by nutrient rich upwellings.

Each day will be planned to take advantage of local ice and weather conditions. Distances are relatively short in the Archipelago and as there are no ocean crossings, the seas are normally calm. During these six days visit ice covered seas, fjords with breathtaking mountain scenery and glaciers flowing into the sea.

Possibility to cruise in Zodiacs along the ice edge viewing seals or walrus, in fjords with glaciers spilling down to the sea or in front of spectacular seabird cliffs.

The evening of our last full day of adventure will find the expedition ship anchored off Longyearbyen. Meals: (B, L, D)

You arrive back to Longyearbyen during the night, with embarkation after an early breakfast. You will be transferred to either the Radisson Blu Polar Hotel (for afternoon or evening flights) or directly to the airport. Due to limited flights from Longyearbyen a special disembarkation and transfer is possible at 2:30am for those with very, early flights. Meals: (B)

Have some extra time to spend searching for polar bears and exploring the tundra? Ask us about the Realm of the Polar Bear in Depth cruise program which gives you a more complete exploration of the islands of Svalbard. 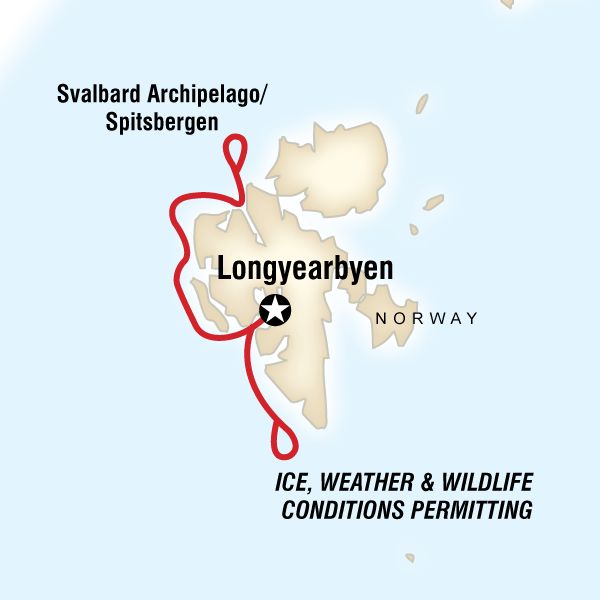