Let the Irish limerick lead the way as you take in as much of the Emerald Isle as you can on this nine day tour. Explore the seductive scenery, taste the wet whiskey on your lips, and hike up the majestic mountains

Starting off in Dublin, you will head north to Belfast. There, you will take a short city tour which will highlight the capital’s successes, calamities, and get right down deep in its soul. After lunch, you will have time to follow the last footsteps of the Irish emigrants before they boarded the ill-fated Titanic. The ship was also built in this harbour. You can visit the Titanic museum, board the HMS Caroline, or take a black cab tour of the city. Leaving Belfast behind you, the tour continues to the Antrim Coast and Glens, an Official Area of Outstanding Natural Beauty. Winding down the roads, you will make your way to the Giant’s Causeway where you will have time to explore these mysterious geological formations. You will then say good-bye to the giant’s steps and head to Portrush where you will be spending your first night.

These small group tours are basic and more casual than many of the other escorted tours. They offer you the choice of paying admission locally to the sites you wish to visit or skipping an attraction that isn’t of interest to you. There is the opportunity to have some free time in the evenings to go out for dinner to a cafe or restaurant of your choosing on your own, buy some food at a supermarket or take-out and eat at your accommodation or hang out with other people from your tour. The choice is yours!

Places You’ll Explore on this Tour:
The City of Belfast – A city steeped in the history and heartaches of Ireland.
The Titanic Quarter – See the regenerated waterfront where the Titanic was constructed and explore the tragic histories of the people who built it.
Giant’s Causeway – Feel the power of Irish giants in the unique and breathtaking coastal formations of the Causeway.
Portrush – Relax in this small but charming coastal resort town.
Derry – Enter the only completely walled city in Ireland and the British Isles where markets, spires and museums await within.
Donegal – Venture into this land of castles, rugged coasts and thick forest, where Gaelic culture is writ large and proud.
County Mayo – Explore the typical Irish scenery and magnificent wildlife of this land with a tragic past.
Kylemore Abbey – A refuge for Benedictine nuns fleeing World War 1, this incredible neo-gothic building is steeped in the scars and bravery of world history.
Connemara National Park – Stunning vistas and superb wildlife abound within this famously serene park.
Clifden – The “Capital of Connemara”, this historically significant site is where the first transatlantic flight landed.
The Sky Road – 11km of heaven, you’ll see the Ireland only usually glimpsed on postcards and travel blogs. Visually arresting landscapes offer views that will fill your senses.
The Twelve Bens – The towering peaks of twelve mountains above a rare bog habitat and pristine lakes, this is a dramatic area that always teems with wildlife.
Galway Town – Stone clad buildings line the winding lanes and medieval walls of this ancient harbour city, all accompanied by the strains of traditional music pouring from cosy pubs.
Cliffs of Moher – Behold an awe-inspiring 700ft drop to the crashing waves of the Atlantic Ocean.
The Burren – A true treasure of Ireland: beautiful and mysterious in equal measure. This national park is home to some of the nation’s most profound spiritual and natural culture.
Dingle Peninsula – Glorious beaches merge with traditional Irish scenery in this land of Gaelic mystery and towering forts.
Ring of Kerry – Travel over 100 miles of beauty and intrigue, with something for all the senses along this classic tour route.
Torc Waterfall – Learn of the ancient curse that formed this waterfall and its inimitable cascade.
Blarney Castle – Kiss the famed Blarney Stone amidst the walls of this impressive medieval stronghold.
Kilkenny – Survey the dominant and unmistakeable three walled castle whilst roaming its splendid grounds and market
town.

After a hearty breakfast, you will be travelling to Derry to explore the 17th century walled city and its many museums, galleries and markets. From here, you will journey on to County Donegal where you will be able to brush up on your Gaelic. Then, you will head into Glenveagh National Park, past the picturesque peak of Mount Errigal before arriving at the coast. There will be plenty of time to explore the fishing villages on the way to your overnight stop in Donegal.

Today, you will travel to the burial site of famed poet WB Yeats, with its views of the mystical mountain, Benbulben. Outside the county, you will have the chance to explore the largest collection of megalithic tombs in Ireland, some of which date back over 6000 years. Moving on, you enter County Mayo, an area hit hard during the Great Potato Famine. With its winding roads and fantastic farmlands, you will be taken through the history of the area. At the Atlantic Coast, you will visit Achill Island and have time to listen to the sea crash against the shore before you make your way to Westport where you will stay for the next two nights.

You will be able to explore Westport and Connemara National Park today, and your guide will ensure you get the most out of your day of touring. Your options include: the house and grounds at Kylemore Abbey, the Connemara National Park, Clifden, the Sky Road and the Twelve Bens of Connemara.After an exciting and full day of exploring, you return back to Westport for some much deserved local seafood and other local fares.

Today you will move on from Westport towards the town of Cong on the shore of Lough Corrib. Here, you will be able to visit a local museum dedicated to the movie ‘The Quiet Man’, or you can visit the restored 12th century Cong Abbey. Your journey will wind through the Maam Valley, a pass lined by monstrous mountains. Leaving the valley, you head to Galway City, arriving in the late afternoon. You are free to explore the city for the rest of the day.

With a new guide, you will take a short drive along the coast to Burren. This area is home to one of the earliest Christian settlements in Ireland with limestone pavements and rare vegetation. After you have finished exploring, you will travel to Kilfenora, or the ‘town of the crosses’. Meander through the town and the ancient cathedral before it’s time to stop for lunch. The Cliffs of Moher is next, with its 700ft. drop to the Atlantic Ocean below. Watch the sea birds soar along the thermals and listen to the waves crash against the shore. Your journey then moves south past a famous golf course to the beach at Lahinch. From here, you will board a ferry that will take you across the Shannon Estuary to Killarney. For the next three nights, you will call this lively city home. Take in the local culture and get the Irish song moving in your heart.

The Dingle Peninsula is first on your agenda today, Inch Beach to be exact, where the sand stretches into the ocean. Travel down the narrow roads through the town of Dingle and continue on towards Slea Head. The picturesque views of the nearby Blasket Islands will leave you breathless. Arriving back to Killarney, you will have the rest of the afternoon to rest and relax. Take a stroll and explore the town and the National Park that surrounds the town.

Today, you will take a journey around the Ring of Kerry, stopping at Ireland’s highest peak, Carrauntoohil. Keeping on the route, you will pass through Glenbeigh and Kells on your way to Portmagee where you will stop for lunch. If you have time, take the excursion to the island of Valentia for a visit to the Skellig Experience. For the silent movie buffs, you will be able to stop at Charlie Chaplin’s home away from home at Waterville, before venturing up to the views of Coonmakista pass. On your way down again, you head to Derrynane House where you can wander the lush gardens and a visit to the main house. Continuing along the Ring, you will stop at Moll’s Gap and the Ladies View with a short walk to Torc Waterfall. From there, you will head back to Killarney for your last night of the tour.

We can arrange for accommodation in Dublin before and after this tour, to allow you time to explore this lively and historic city. Accommodation ranges from hostels, B&B/guesthouses, all categories of hotels up to castle stays. Please inquire. 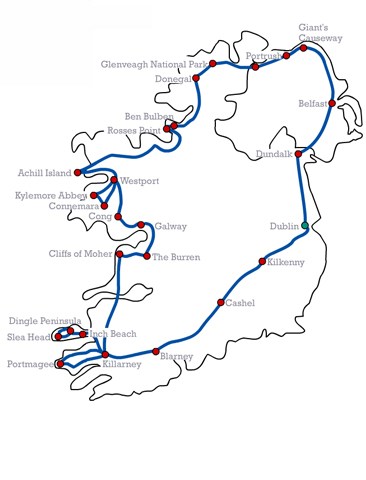