Discover the history, geology, excellent food and wine, and the sheer beauty of the Pacific Northwest. We travel through the region as the Indigenous people, early European explorers and eventual settlers did—by the waterways that stretch far inland from the Pacific Ocean.

Call for dates and pricing

In the late afternoon, embark the ship and cruise the lower part of the Willamette River, passing under the many bridges and through the centre of picturesque Portland, before reaching the Columbia River.

Please Note: Instead of visiting Astoria, April departures will visit Walla Walla, Washington, where we will drive through bright, rolling green fields of sprouting wheat, asparagus, and the famous Walla Walla sweet onions. Enjoy a special lunch and tasting at one of the city’s celebrated wineries.

Continue east on the Columbia River, which forms the border between Washington and Oregon. Deepening canyons signify the beginning of the 100-mile stretch known as the Columbia River Gorge. Learn about the region’s natural and cultural history at the Columbia Gorge Interpretive Center in Stevenson, Washington. Hike up the towering monolith of Beacon Rock, where Lewis and Clark camped on their way west and first noted the effect of the ocean’s tides on the river. Continue through the gorge to the city of Hood River, situated at the foot of majestic Mount Hood. Enjoy the fruits of the valley’s orchards at a farm-to-table lunch, then choose to visit the Western Antique Aeroplane & Automobile Museum (WAAAM), home to one of the largest collections of still-functioning antique cars and planes in the country, or explore the hiking through the historic Twin Mosier Tunnels where the trail is bordered by desert parsley, balsamroot, and colorful maples.

Today we cruise past some of the most scenic and geologically interesting stretches of the Columbia River, including the Columbia Plateau. Our onboard geologist and naturalists will illuminate the natural phenomena of the Columbian Basalt lava flows and the Missoula Floods, which sculpted the landscape between 13,000 and 15,000 years ago. We then sail up the Snake River, the Columbia River’s largest tributary, which is over a thousand miles long.

Explore the still waters of the Palouse River—a tributary of the Snake River—by Zodiac or kayak. Disembark to get up close to the steep basalt cliffs and the 200-foot cascade of Palouse Falls. The surrounding canyon is part of the Channeled Scablands, geographical features carved by the periodic Missoula Floods that once swept across the region. Relive heroic tales of the Corps of Discovery during informative talks, photograph stunning landscapes from the top deck, or unwind with a massage from our wellness specialist.

Cruise past the confluence of the Snake and Clearwater Rivers at Clarkston, Washington. Named for William Clark, the city is located directly across the river from Lewiston, Idaho—named for Meriwether Lewis. Travel by jet boat into spectacular Hells Canyon, North America’s deepest river gorge. As you zip across eddies and rapids, your knowledgeable driver will point out pictographs and petroglyphs created by the gorge’s first inhabitants, the Nez Percé tribe. Later, gather in the ship’s lounge to hear songs and stories performed by a local Nez Percé storyteller. In the evening, welcome a winemaker onboard and sip local vintages while learning about the characteristics of the Lewis-Clark Valley AVA, the newest American Viticultural Area (eastbound departures only).

Disembark in Clarkston and transfer to Lewiston, Idaho or Spokane, Washington for your flight home.

Portland, Oregon – Stroll through green parks and fragrant rose gardens, savor farm-to-table cuisine and world-class wines, and delve into the rich pioneer history of Portland, Oregon during a stay in this welcoming city. Choose to set out on a half day tour of Portland’s historic districts and trendy neighborhoods with a local guide. Or venture into the lush hills of the Willamette Valley to visit three renowned wineries that are experimenting with new approaches to an ancient craft. Or make a full day of it and enjoy both excursions—the choice is yours.

Portland Half-day City Tour: Portland’s rich cultural heritage is evident in its many epithets, from the City of Roses to Bridgetown, Beertown, and the Greenest City in America. Explore the city’s colorful history on a half-day tour alongside our local guide. Begin with a panoramic view of Portland’s skyline and distant Mount Hood from the exquisite Pittock Mansion, which overlooks the city from the wooded West Hills. Then venture into the neighborhoods of Portland’s five quadrants to experience each area’s unique atmosphere. Discover innovative art galleries and stylishly renovated warehouses in the Pearl District, and marvel at 19th-century architecture in the central old town. Later, learn about Portland’s abundant flora and fauna while exploring scenic sections of the city’s 10,000 acres of public parks.

Willamette Valley Winery Half-day tour: South of Portland, nestled along the verdant banks of the Willamette River and bounded by soaring mountain ranges on three sides, lies Oregon’s “promised land”: the Willamette Valley. Pioneers by the thousands traveled along the famed Oregon Trail to set down roots in the valley’s rich farmlands. Today, the Willamette Valley AVA (American Viticultural Area) wine grape-growing region contains six sub-appellations comprising over 500 wineries, particularly well-known for pinot noir. Set out on a private tour of three award-winning wineries. With our expert guide, learn about exciting developments in the local industry, from biodynamic to single block wines, sourced from a single distinct section of a vineyard. Enjoy a series of wine tastings, followed by a locally sourced picnic lunch. Return to Portland and enjoy the evening on your own to explore one of the country’s most celebrated restaurant scenes.

Lewiston, Idaho – Deepen your explorations of the Lewis Clark Valley and discover the steep canyons and picturesque vineyards of its emerging wine region. Though it’s the newest American Viticultural Area, vines were planted here as early as 1872. Join a local historian for a guided tour rich in tastings as well as insights about the native Nez Percé people.
Day 1: Disembark the ship this morning and transfer to our hotel in Lewiston, Idaho, nestled at the confluence of the scenic Snake and Clearwater Rivers. Meet your private guide and set off on a daylong excursion through the Lewis-Clark Valley. On a visit to the Nez Perce National Historical Park, get a primer on the resilient Nimi’ipuu (Nez Percé) people, who have made the prairies and plateaus of the inland northwest their home for thousands of years. Discover their homeland and learn about their traditional ways of life, which persevered through European settlement.
Day 2: After breakfast, transfer to the airport for your return flight home. 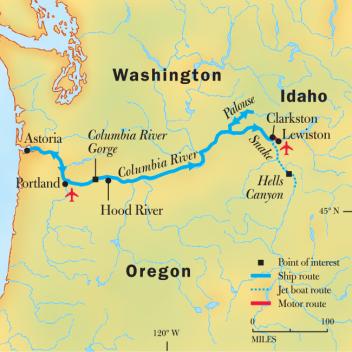