With its gentler gradient and sense of unspoiled wilderness, the Rongai Route approaches Kilimanjaro from the north and is less crowded than other trails. This route allows an extra day for acclimatization under the imposing spires of Mawenzi, before the arduous final ascent. Graded The hike is a grade 5 (challenging) except the Uhuru Peak ascent on Day 6, grade 5 (tough).

Prices are “starting from” rates, shown in CA$, per person based on two people sharing a twin room or one person in a single room.

There will be a trip briefing this afternoon/evening. You will be required to bring your passport, insurance details and your air ticket details. The briefing will cover all aspects of your trip and will include the distribution of any hired equipment you have booked.

This trip requires a high level of fitness with previous experience in trekking longer hours and various terrains. This is a hard trek, which reaches an altitude of 5,895m. Even if you consider yourself fit, you might still find the climb very hard, depending on how well your body adjusts to the changes in high altitude. There is no scientific way to determine how easily you acclimatize, and be aware that the acclimatization process can also differ from climb to climb. However, adding an extra day to the ascent increases the chances of reaching the summit by at least 20%. Historically, on this extended climb, about 90% of climbers reach Gilman’s Point and 80% reach Uhuru Peak, the true summit of Kilimanjaro!

After completing the necessary registration formalities, you will be transferred by road to Nale Moru (1,950m) to begin your climb on the wilderness route. The first day is only a half-day walk on a small path that winds through farmland and pine plantations. It is a consistent but gentle climb through attractive forest that shelters a variety of wildlife. You will reach your first overnight stop by late afternoon at the edge of the moorland zone (2,600m).

The morning walk is a steady ascent up to ‘Second Cave’ (3,450m) with superb views of the Eastern icefields on the rim of Kibo, the youngest and highest of the three volcanoes that form the entire mountain. After lunch, you will leave the main trail and strike out across the moorland on a smaller path towards the jagged peaks of Mawenzi, the second of Kilimanjaro’s volcanoes. Your campsite, which you will reach in the late afternoon, is in a sheltered valley near Kikelewa Caves (3,600m).

A steep climb up grassy slopes is rewarded by superb panoramas of the Kenyan plains to the north. You will leave the vegetation behind close to Mawenzi Tarn (4,330m), spectacularly situated in a cirque beneath the towering cliffs of Mawenzi. The afternoon will be free to rest or to explore the surrounding area as an aid to acclimatisation.

You will leave your campsite to cross the lunar desert of the ‘Saddle’ between Mawenzi and Kibo to reach Kibo campsite (4,700m) at the bottom of the Kibo Crater wall by early afternoon. The remainder of the day is spent resting in preparation for the final ascent before a very early night.

You will start the final, and by far the steepest and most demanding part of the climb by torchlight at around midnight. It will be extremely cold as you walk very slowly in darkness on a switchback trail through loose volcanic scree to reach the Crater rim at Gillman’s Point (5,685m). You will rest there for a short time to enjoy the spectacular sunrise over Mawenzi. Those who are still feeling strong can make the three hour round trip along the snow-covered rim to the true summit of Uhuru Peak (5,895m), passing close to the spectacular glaciers and ice cliffs that still occupy most of the summit area. The descent to Kibo Hut (4,700m) is surprisingly fast and, after some refreshments and rest, you will continue descending to reach your final campsite at Horombo (3,7250m). This is an extremely long and hard day, with between 11 and 15 hours of walking at high altitude.

A sustained descent with wide views across the moorland takes you into the lovely forest around Mandara (2,700m), the first stopping place on the Marangu route. The trail continues through semi-tropical vegetation to the national park gate at Marangu (1,830m). You will be leaving the local staff to return to your hotel in Marangu by mid-afternoon for a well-deserved rest and a much needed shower and beer!

Depending on the time of your return flight, the day can be spent resting in the hotel garden or exploring the village for souvenirs. There is a highly recommended but optional village walk that explores Marangu for half a day. This village is a fascinating mixture of small but fertile coffee and banana farms, friendly Chagga people, and some beautiful scenery with waterfalls and magnificent views.

We also offer the Mount Kilimanjaro Climb- Marangu Route journey. (Tour Code: 002506-R17). One of the most popular routes to the summit of Mt. Kilimanjaro, Tanzania, the Marangu route is classified as a moderate trek rather than a climb, suitable for adventurers who are not experienced in the mountains. It begins and ends in Moshi.

The Marangu route is used by almost 40% of all climbers and uses comfortable mountain huts with solar power lighting.

Although the trail can be a little crowded at certain times of the year, the views are beautiful and each day of walking progresses through a different climate zone, adding considerably to the interest of the trek. The real highlight is the walk from Gillman’s point along the crater rim to Uhuru Peak, passing close to the spectacular glaciers and ice cliffs that occupy most of the summit area. The views as the sun rises behind Mawenzi on a clear morning are absolutely magnificent – The Rift Valley, Mt. Meru and the Masai Steppes stand out from the endless plains, almost three vertical miles below.

At 5,895 m (19,340 ft), Mt Kilimanjaro is Africa’s highest peak and this adventure along the Marangu Route will get you to the top safely, quickly, and with your budget in mind. Overnight in mountain huts and awake ready to conquer the slopes. As a leader in Kili treks, we’ll take you to new heights in adventure on your way to the roof of Africa. Affectionately known as the “Coca-Cola Route” due to its popularity, Marangu covers forests, moorlands, and “the Saddle” (a high-altitude desert), on its way to Kibo Hut. This is the easiest route to summit – with a catch. The trail is well maintained but because of the quick ascent, the success rate is not as high as some other, longer routes.

In addition to the Rongai Route there are other longer, more gradual ascents including the 8 day Machame Route and the 10 day Lemosho Route.

Ask us for itinerary details and pricing on any of these alternate Mount Kilimanjaro climbs. 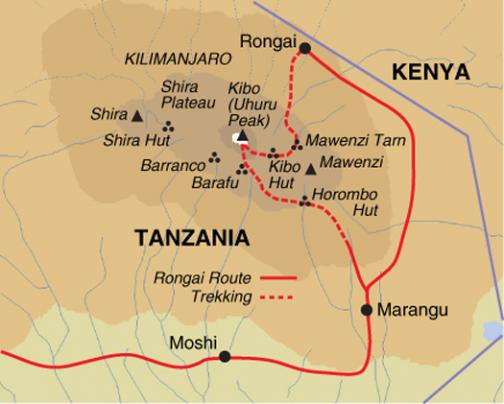