The Winnipeg Chamber of Commerce group went on this exciting trip in September, 2019. The customized itinerary provided travellers in their group an incredible mix of natural beauty, interesting history and cultural experiences. Included was a visit to a winery near Santiago, the stunning Iguazu Falls, a tango show in Buenos Aires, and much more. To arrange a group similar to this one please contact Natalie Hébert for more information.

Sample prices are shown in CA$, based on the September 2019 group, per person based on two people sharing a twin room and one person in a single room. Actual pricing will depend on your group’s travel dates and inclusions.

Today you will either meets up with other group members at Winnipeg  airport and travel together on an overnight flight bound for Santiago, Chile. Optionally, the airfare can be done individually and you can choose to have your group meet up at the airport in Santiago.

After a buffet breakfast, you will have a full day at Maipo Valley including a program at the prestigious Odfjell boutique vineyard.

Located south of Santiago, the Maipo Valley has some 200 vineyards of different sizes and specialties, from family-run boutique properties to sophisticated, hi-tech plants exporting millions of bottles each year.

A guided tasting, lunch and a guided tour of the winery are on the itinerary for today before heading back to Santiago.

A buffet breakfast will be served at the hotel’s restaurant before your guide meets you in the lobby. You will be transferred to the airport for your flight to Puerto Montt.

The tour will begin with a visit to the highest place in Puerto Montt city where you will see the most beautiful view of the city and the ocean. From there, you will go to the German Monument located in the Main Square and the Cathedral.

From Puerto Montt, you will continue on to Angelmo, Chile, with its many hand crafts and gift shops.

In the afternoon, you will go along the Pan-American road to Puerto Varas, also known as the City of the Roses. You will see the Church of the Sacred Heart of Jesus, built during the year of 1915 – 1918, and is a exact replica of a church in Black Forest, Germany.

After checking out the lake front, you will check into your hotel for the night.

After breakfast at the hotel, you will depart from Puerto Varas to go along the border of Llanquihue Lake towards Petrohué.

From Petrohué, you will board a boat to sail in the beautiful Todos los Santos Lake, also known as Emerald Lake because of the gree-blue colour of its water. You will sail towards Peulla.

This is where you will be staying for the next three nights.

This morning, you will embark on a half-day adventure that helps you learn about the surrounding areas, its lakes and history. Visit one of the main attractions in the region: the woodlands. Explore Patagonia’s best-kept secret spots. Walk for about 40 minutes on even terrain, a low-intensity activity, your guide interpreting the sounds of the forest, such as the thrilling sound of the chucao (chucao) or the regular pecking of a woodpecker while enjoying yerba mate (tea). Difficulty level is low, and it requires basic fitness level. Wear sports footwear such as running shoes, synthetic warm clothing, a small backpack for personal belongings, such as sunglasses, hat and gloves and
sunscreen.

Enjoy some of Argentina’s most attractive scenery on half-day sightseeing tour of Bariloche. Few places blend nature with rich greens and gentle blues in a myriad of streams and lakes framed by snow-capped peaks and lightly-clouded skies. Visit Llao Llao peninsula, beautiful López Bay, the Cerro Campanario chairlift, which offers spectacular views of the valley, and downtown Bariloche.

Buffet breakfast will be served at the hotel’s restaurant before your transfer to the local airport for your flight to Iguazu.

Puerto Iguazú is a quiet town located at the confluence of the Iguazú and Parana rivers. One of the most popular spots is the Hito Argentino observation point, about a kilometre west (0.6 miles) of town. The magnificent view includes Brazil and Paraguay, together with the waters of the rivers, creating a natural border line between the three countries. Almost everything here is related to the falls; there are great places to eat or buy souvenirs and crafts.

Enjoy a full-day visit to the Argentine side of the Iguazu Falls National Park. This side of park was created in 1934 and covers around 123,5000 acres (50,000 hectares), offering unique contact with nature as you get within a few steps from the thundering cascades. Feel the proximity of the falls and observe its beautiful vegetation, birds and butterflies, walking along the footbridges and roads.

Waterproof clothing is necessary, since there is a small price to pay for getting within such close range of the falls! Arriving at the Visitors Center, access the Nature Interpretation Center of Iguazu National Park, which also provides cultural, educational and social activities. This is the starting point for the amazing Devil’s Gorge tour. Departing from Cataratas Station, the train takes you to Garganta Station in 18 minutes. The stroll along the catwalks is 1.2km (one mile) across the delta
islands, leading to the main balcony located next to the most spectacular fall, the Devil’s Gorge.

A buffet lunch will be served at a local restaurant before your transfer to the Puerto Iguazu airport for your flight to Buenos Aires.

Buenos Aires half day walking tour – Elegant or Aristocratic Recoleta. This is one of Buenos Aires’ most elegant districts and at its heart is Alvear Avenue, home to some
of the most exclusive buildings, hotels and boutiques in town, including the Four Seasons and its Alzaga Unzue Mansion; the Brazilian Embassy, a building that took almost 20 years to be built and borrowed details from the Palais Fontainebleau in France; the French Embassy, a beautiful example of the Belle Époque style and, of course, the Alvear Palace Hotel. Along its main avenue, guests can drop by the many luxury brand stores that have set up shop.

Stop by Nuestra Señora del Pilar Church and the Recoleta Cemetery, known for its rich architecture and famous characters from Argentine history and society buried there. What makes this cemetery so remarkable is the architectural significance of its monuments and mausoleums as well as the number of historical and artistic celebrities whose remains rest behind its wrought-iron gates.

Explore some of the most recognizable landmarks in the southern part of the Paris of South on a four-hour sightseeing tour. Find out about the history and culture of Buenos Aires, as you take in some of the city’s the most significant spots.

Discover the most important square in the country: Plaza de Mayo. The country was founded here in 1580, and today the most important governmental buildings are located on these four streets including Casa Rosada (Government House), Cabildo (City Hall) and Catedral Metropolitana (Metropolitan Cathedral). Government Palace opens to visitors if you’re keen to take a look inside. Walk down Defensa Street to reach San Telmo, one of the oldest areas of the city. This neighbourhood maintains a great part of its architectonic patrimony intact: colonial-style houses, cobbled streets and a bustling collection of artists’ studios, ethnic restaurants, antique shops and
boutiques. Walk through the oldest and narrowest streets of this protected colonial district, with its famous cobbled streets to Plaza Dorrego. This is the heart of 19th-century Buenos Aires, plus this area is home to some fascinating antique shops.

The next stop-off is the picturesque district of La Boca, home to Caminito, perhaps the city’s most photographed area thanks to its corrugated iron and brightly-colored houses. This block houses one of the few outdoor museums in the world, where artists exhibit works related to the influence of mainly Italian citizens who arrived at this port at the end of the 19th century. Also stop by at the famous Bombonera stadium, home to legendary football soccer giants Boca Juniors, whose colors
of blue and yellow adorn most of the houses and stores in this barrio.

Before returning to your hotel, pass through Puerto Madero and see this regenerated area where redbrick warehouses have been transformed into trendy restaurants and bars.

This evening you will be treated to dinner and a Tango show at El Aljibe.

Located in the heart of San Telmo, El Aljibe show combines both tango and folk. A classic architectural example of Buenos Aires’ from a different epoch, this historical and restored conventillo (tenement) instantly sets the mood, taking guests back in time. Its interior, which preserves the building in its purest style, creates the ideal setting for a special cultural experience that includes excellent performers, a tango orchestra, folk performers, tango dancers and singers.

You will be transferred from the hotel to the airport for your flight home. Or you can choose to take one of the two extensions available. 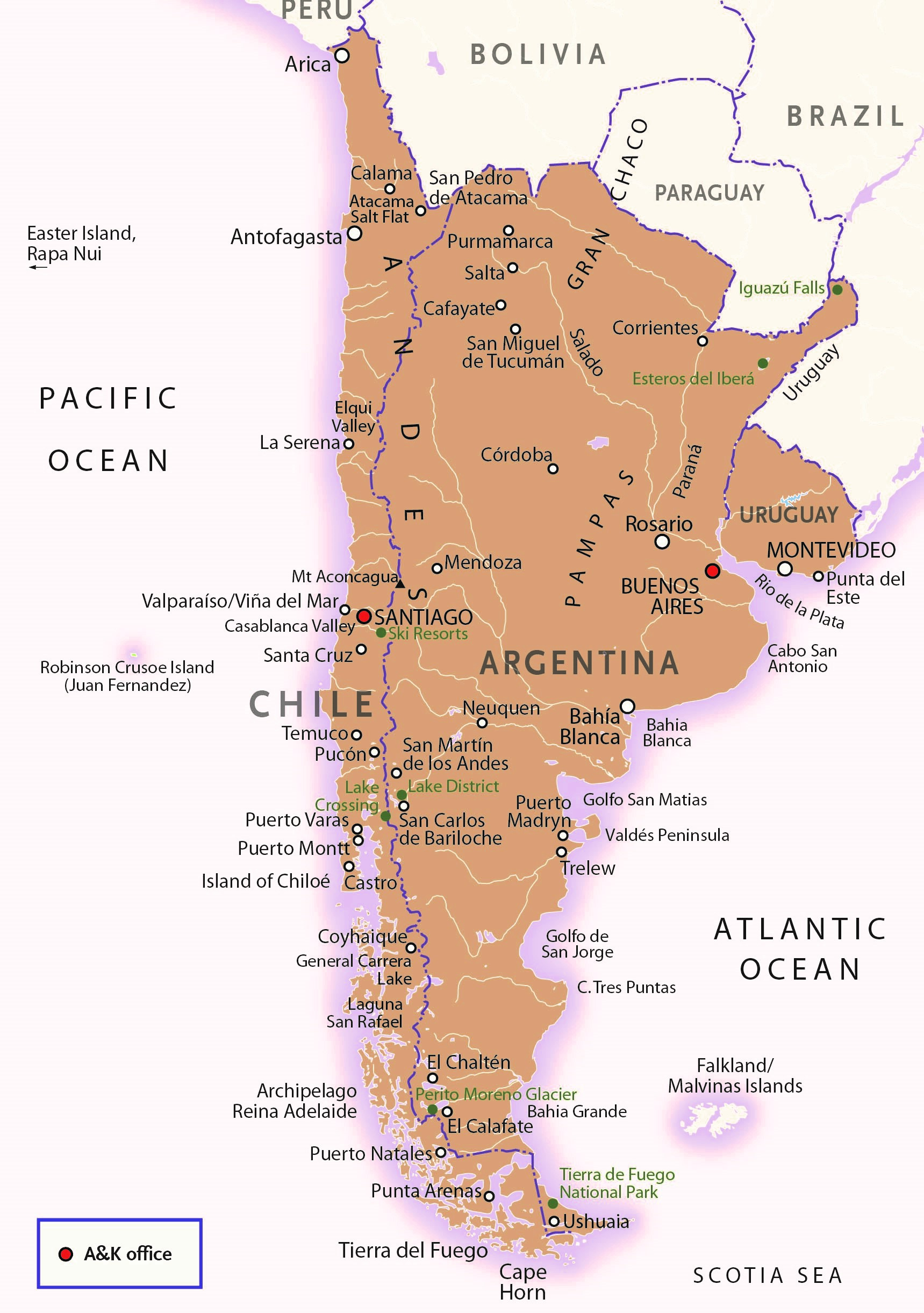