Sounds idyllic, and it is! Norway as a cruise destination was fabulous, stunning scenery and had many interesting places to visit.

My husband and I decided on a cruise to Norway. A few people told us about their experience on the ‘rough waters’ of the North Sea. I was a bit apprehensive about ‘cruising’ the rough waters, but we didn’t experience any of that.  We had wonderful calm waters, and fabulous warm weather in Norway. To borrow an old well used phrase, “it was smooth sailing”. 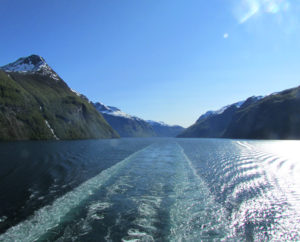 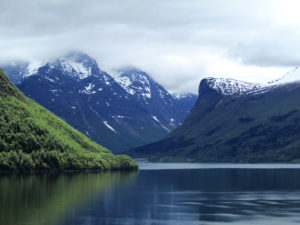 We sailed on Cruise & Maritime Voyages, Magellan ship and if you are interested in a ‘British Cruise Experience’ this is a good choice.  We understood how it appeals to the British passengers, they can drive or get transferred by bus to the port of Tillbury. So, this makes it an economical option. The passenger manifest was primarily British.

The Magellan is an older ship that has been refurbished. It is not a luxury vessel, not glitzy, but comfortable. It was not huge, and our sailing was at full capacity with about 1200 passengers. However, it never felt crowded. Embarkation was fairly quick and efficient in Tilbury and our suitcases arrived in our room shortly after we did. 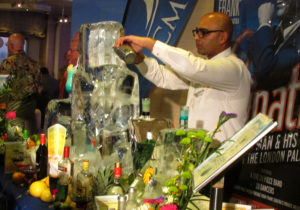 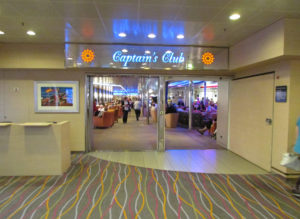 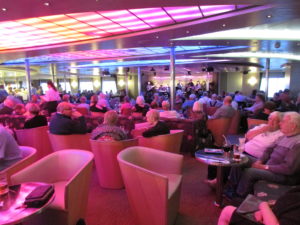 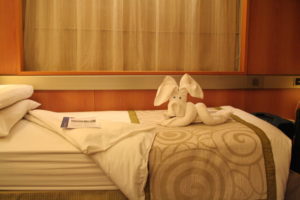 Our Level 7 outside room, had a nice big window, nice and bright. Our cabin was large enough, ample closet space to store clothes and suitcases.

Mealtimes in the dining room were pleasant. We chose to dine at a table for six. It was interesting meeting new fellow passengers. The staff were attentive and very polite. It was amazing to find out how many different nationalities of staff there were.  The dinner choices were plentiful even though my husband (a big eater) visited the buffet in the self service restaurant, where he would ‘nibble’ before eating in the formal dining room. Breakfasts were served buffet style in the two dining rooms and in the self-service restaurant. There was a daily afternoon tea with scones, etc., as well as a pizzeria that was often open. There was more food available in bars from 10-10:30 every night, however if you had a late dinner seating you were more than likely not that hungry (especially if you ‘pre-ate’, like my husband). One would never go hungry.  The port city of Bergen is known to have some of the best cuisine in Norway, however a downside to having plentiful food aboard the ship, you’re not able to experience the cuisine of the area.

After a first day of sailing across the North Sea from London Tillbury we arrived in Bergen the following morning. Bergen is Norway’s second largest city, the ‘fjord capital of Norway’. This was the starting point for the exploration of Norway’s most spectacular scenery. 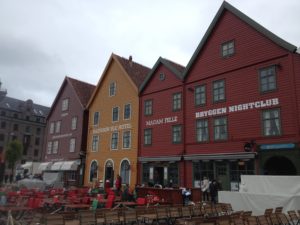 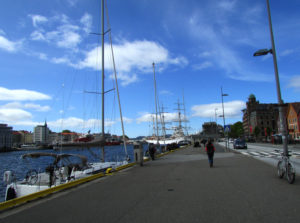 Beregn’s weather is notorious for being unreliable and one can experience rain upwards of two hundred days a year. When we arrived it was partly cloudy, cool but pleasant – no rain. It is an international port with the charming traditions of a small town. We walked through the Hanseatic wharf in Bryggen, which is the heart of medieval Bergen. Much of the high gabled buildings are still in use. You could see small entrances to what appears to be an alleyway, and you will find many quaint unique shops, restaurants & historical museums. The outdoor fish market in Torget Square is a must see. We sampled smoked minke whale, but you could easily have a full plate of many other fish samplings.

As a tourist walking down the streets of Bergen, look for a lot of people standing outside of a shop, that’s where you’ll find free wifi!

In Bergen you can take the Mount Floyen Funicular from the city centre to the top of Mount Floyen. This experience offers spectacular panoramic views of the city & the suburbs. If you choose, you may travel from the south of the city to the home of Edvard Grieg, the summer residence of Norways most famous composer. Visiting this area, you would understand how his inspiration was the beautiful fjordland scenery.

Some of Bergen’s other attractions include King Hakon’s Hall, The Rosenkrantz Tower, St. Mary’s Church,  the Fantoft Stavechurch, the Grieghallen Concert Hall, the Bergen Aquarium, or the Mount Ulriken Cable Car to experience breathtaking views.

One of the comments my husband made was he was amazed at how adept the Norwegians were in speaking several languages.

The second day in Norway took us to the towns of Molde and Andalsnes. Molde, ‘The City of Roses’ is a town surrounded by mountains, the northern part of Fjord Norway. From there we took a shore excursion on the Atlantic Ocean Road over the famous Storseisundet Bridge. Molde, at 62⁰ latitude boasts a warm climate because of the Gulf stream. It never gets colder than -5⁰. It is very pretty, easy to plant lots of flowers, and trees. Molde hosts the biggest jazz festival in Scandinavia in July of each year and is the oldest jazz festival in Europe. 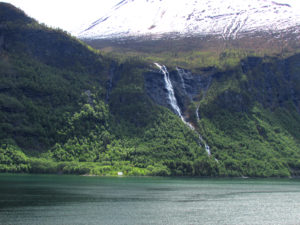 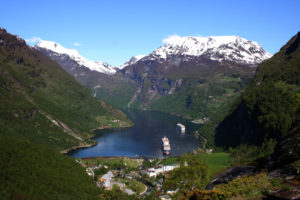 The afternoon took us the Andalsnes, a small village, but the valley & surrounding mountains and fjords are quite amazing. This area is the center for mountaineering in Norway. Here, you can take an excursion to Trollveggan, or Troll Wall.

One constant iconic souvenir in Norway is their affiliation with “Trolls”. Trolls are creatures generally believed to possess supernatural powers. They come out of their hiding places after sunset and disappear before it gets light. Exposure to the sun causes them to crack and turn to stone. Even rocks can be seen with troll-like features. The true origin and lifestyle of trolls remain something of a mystery even to this day. 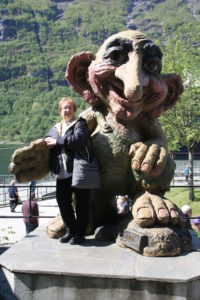 The late evening before heading to bed, around 11:00 pm, we took a stroll to the front of the ship, and watched the setting sun on the mountain tops. So peaceful, so amazing.

After a night of cruising the fjord, the next morning we had arrived in Geiranger. Here it is known as the real jewel of the Norwegian fjords. The nature seemed unspoiled and so beautiful.  Sailing on the water, looking over the cliffside farms, up at the mountains, is just truly spectacular. But the village of Geiranger is small (population in the hundreds) and they host anywhere from 140 – 180 cruise ships (thousands of people) during the 4 month tourist season. Even though Norwegians are busy with the tourists in the summer, in their free time they are known to enjoy the nature.

We chose the ‘Scenic Geiranger Bus tour’ which is a must. This took us part way up Mt. Dalsnibba for a breathtaking view of Geirangerfjord. You can actually travel up a 45 minute drive to the top of the mountain which gives you the opportunity to see the rich green flora, ice blue lakes, geology and the incredible peaks.

We also drove on Eagle’s Road, which is a steep stretch up a mountain side towards the town of Eidsal. The road has 11 hairpin turns from sea level to the highest point at 620 metres above sea level. We had such gorgeous sunny blue skies and warm temperatures, you could just take in the view for hours. (unless of course you are bit unsure of high heights.) To me, it gave a new meaning to ‘take your breath’ away. 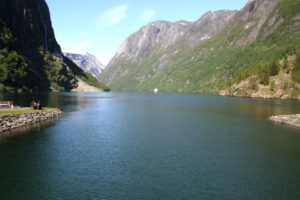 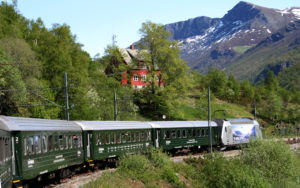 The next day, our last day in the fjords, we travelled to Flâm, to take in a tour “Norway in a Nutshell”. We left Flam on the Flâmsbana train to Myrdal where we transferred to the Bergen Railway to Voss. The Flâm Line is a 12.5 mile long railway that runs only between Flâm and Myrdal. Myrdal is a station on the Bergen Railway that connects the train line from Oslo to Bergen. The Flam Railway is one of the steepest lines in the world and it passes through many tunnels, steep mountains, and foaming waterfalls. It is an older style train, where the windows drop down so you can easily take unencumbered photographs, and hear the waterfalls cascade down to the fjords, and feel the fresh air on your face.  From Voss, we had a bus coach tour back down the mountainside to Flam where we returned to the ship to sail back over the North Sea for the next 2 nights and a day, to return to London Tillbury.

Some of the people we met, asked that being from Canada we must see some amazing sites from the Rocky Mountains in western Canada. And yes, it’s true, our Rocky Mountains are spectacular and need to be seen to be appreciated, but somehow travelling on the water through the lush green fjords of Norway was truly idyllic!