Travelling with an Infant | The Great Canadian Travel Co.
Skip to content

The screams, the looks from other passengers and the concern for your child’s ears. These are the concerns, no, shall we say, stresses, that come with travelling on a plane with a young child. To those parents, grandparents, caregivers, etc. travelling with an infant, you are not alone. A lot of us have been there.

It was December 22, 2013. My daughter was 4 months old and we were getting ready to leave for a week long family trip to St. Lucia. I was all ready. The diapers and bottles packed, the extra clothes, blankets and, of course the stuffies, were all ready in the carry-on. I wasn’t worried because we would have 6 adults for 1 child on the way to Toronto, then 8 adults for 1 child from Toronto to St. Lucia. Then, the dreaded less-than-six-months-to-expiry passport issue came up for my husband. As I cried and said goodbye to my parents and my brother and his girlfriend (aka my help on the plane), I wondered how we were going to get there on our own.

The next day, with hundreds of dollars spent on a renewed passport and hundreds more spent on an updated itinerary, we were on our way. My husband, my 4 month old and me. On a plane to Toronto, an overnight at a hotel, then a 6-hour flight to Antigua, a transfer to a smaller plane (that was delayed due to a tropical storm hitting the very island we were trying to get to), and then finally the arrival in St. Lucia to the waiting arms of my family that are already there.

The plane from Winnipeg to Toronto wasn’t too bad, it was late and my daughter slept from taxi to take off. Woke up for about an hour to play and coo and do cute baby things to the nice people on the other side of the aisle. She fed and then fell asleep again until we landed safely in Toronto. If all the flights were like that one, we would be able to handle it. 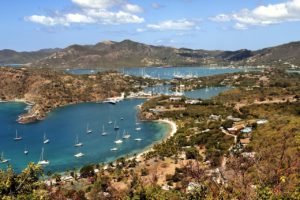 The next morning, we arrived back at the airport, having had a typical night with feeding and restlessness. Tired, the three of us boarded the plane to Antigua. Being one of our first flights with a baby, I was less than prepared. I heard stories of parents bringing little sandwich bags full of candy and a pair of earplugs with a cute little note saying that it’s their baby’s first flight, blah blah blah. I didn’t have time to pack my own carry-on properly, let alone 15 sandwich bags full of random things for strangers.

Taxi… baby is restless so I feed her. She falls asleep. Great! Here comes the ear popping height as we go up, she wakes up – crying. I look over to my husband, and he takes her and tries to calm her down. I look past them to the next row and a woman is nodding at me in solidarity as she tries to wrangle her own child.

My husband’s magical arms calm her down and get her to sleep. She wakes up periodically throughout the flight to eat and then goes back to sleep. The descent into Antigua was flawless. I didn’t even realise we had landed until I looked out the window.

Then it was the unexpected layover in a small airport. It was nice that my daughter couldn’t run around, but it was unfortunate that she was beyond the age of being content just lying around – she needed to be held and walked around. Thank goodness for baby carriers! I plunked her into my soft sided carrier and walked around the little airport. By the time our flight was ready to leave, we were all hot and tired. 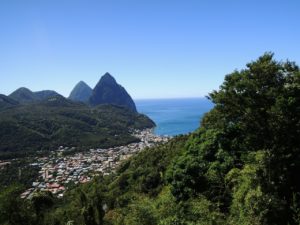 It was a short flight from Antigua to St. Lucia – less than an hour. But less than an hour is still enough time to scream – the entire time. I couldn’t feed her; she was too hot. I couldn’t walk the aisle; it was too small. The flight attendant offered her advice of using a pamphlet as a fan to cool my daughter off. That didn’t work. Finally, I decided that I would try a bottle – it hadn’t been successful in the past, but I was at my wits end. What do you know? It worked.

We landed safely in St. Lucia, hopped in a van that took us to our resort and into the waiting arms of my parents. Not us. Just my daughter. We were hugged as an after thought as it seems to be the case with grandparents and grandchildren – from my experience. 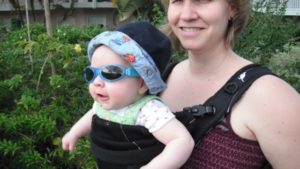 My advice, besides checking to make sure your passport is valid? Remember bottles, pacifiers, puréed food pouches or whatever you have for your child to suck on during those first and last few thousand feet of take off and landing. During the flight, keep them occupied with new books they’ve never seen or stuffies they love or whatever else you can find. My daughter liked to rip up the in-flight magazines (don’t worry, I cleaned it up after). On the larger planes, a walk down the aisle and a chat with the attendants in the back while swaying with the baby has done the trick for me. Whether the flight attendants appreciate that, I cannot say as they’ve always been very accommodating for me, regardless of the airline.

As for the waits at the airports, or the exploring your destination, I have found that a soft sided baby carrier and an umbrella stroller works wonders. A soft sided carrier fits in the carry on quite well if folded and the umbrella stroller (or even a smaller stroller with storage underneath for various bags) is good for running through the airport to catch your connecting flight.

My now 4-year old has been on a plane more times than I had at that age and is content colouring or working on her sticker and alphabet tracing books that she no longer screams. I always remember to take her water bottle with us so that she can suck on the straw and pop her ears when they hurt. 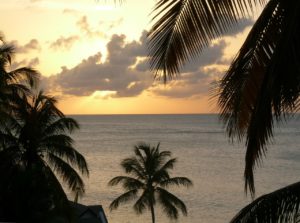