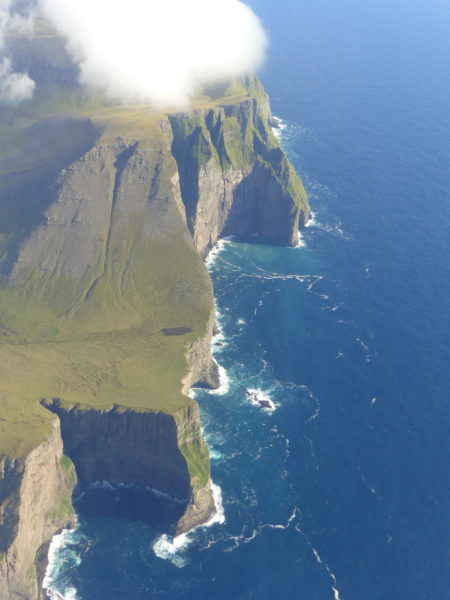 He was true to his word, and our second landing was made in clear skies, although it was raining by the time we had taxied to the terminal and were disembarking. There’s that rapid weather change again, which I would quickly learn was indeed very common here!

What a fantastic, stunning, vibrantly green place the Faroe Islands are. I went on a fantastic boat trip along the Vestmanna Seacliffs and, even though by that time it was raining quite hard, the views were incredible. The hearty home-made soup and freshly baked bread served to us at the cafe, located at the Saga Museum, were welcome after the chilly boat ride. I’d do that boat tour again in a heartbeat, in any weather!

On the bus trip from the bird cliffs to Torshavn, the capital city on the island of Streymoy, I counted waterfalls and stopped counting at 200!

In Torshavn, I was staying at Hotel Foroyar, located on a hillside above the city. The view from my hotel room was a beautiful, pastoral panorama of sheep grazing on the lush grass, the colourful city below and then the blue sea as far as the eye could see. Breathtaking! (At least this stay in Torshavn did not involve a sheep coming into my room through an open window as I napped – but, that was at a different hotel and is a whole other story!)

After the 2-day conference was over I was travelling on my own and had arranged a car rental with a the local tour company we use to arrange our clients’ travel. After a brief look over the vehicle to figure out all the bells and whistles, and get my maps sorted out and my camera ready, off I set.

The map I had of Torshavn didn’t indicate which streets were one-ways (and a lot of them are). So, on my way from the car rental office to the harbour, I ended up in an old, residential area. The streets here were very narrow with steep inclines and down ramps. I quickly realized that driving here is not for the faint of heart, but isn’t super difficult either. It just requires a cool head – Keep Calm and Don’t Panic!

I had a manual transmission car, which was absolutely fine for me as I drive one at home, but for anyone who doesn’t regularly drive a standard or isn’t really confident driving one, I would highly recommend reserving an automatic. Even though automatic cars are not as common and are more expensive, the extra cost will make the driving much more enjoyable and safer, too.

After my adventure in the “alleyways” of old Torshavn I parked the car and did a walking tour along the harbour and amongst the heritage buildings, including the government house. The old red-timbered buildings and the black houses with grass roofs were so interesting and harkened back to a time, long ago, when these islands were first settled. Boy, those people sure had to be hardy!

From Torshavn I headed west and then south along the coast to a historic settlement called Kirkjubour, with more old black, grass-roofed buildings and a lovely white church right by the sea. I explored the little community including a visit to the historic ruins of Magnus Cathedral and did a hike in the area. There’s really nowhere in the Faroes that you can’t take a stunning walk or a more demanding hike, as the spirit moves you!

I then headed north on Streymoy along the sea shore and through mountain tunnels to the town of Hvalvik, which was the turnoff to a place called Saksun. This had been recommended to me by one of the agents at the car rental company, so I thought I’d check it out. What a great drive! The road narrowed down to one lane after passing through Hvalvik, so I had to keep an eye on the road well ahead to see if any traffic was coming. There are frequent pull-over spots (which are also great for taking photos!). Saksun is a village located on a gorge with a river running through and a nice waterfall. Further on is an old church and cemetery, with a view down to the sea with sheer cliffs all around. Had a great walk down to the sea here. Seeing this area was well worth the drive, for sure!

Back to the main road, across the bridge connecting Streymoy island to its neighbour Eysturoy and north along the west coast with views down steep cliffs to the fjord below. There is a great view point from the town of Eidi, then the road turns inland up through a mountain pass. Lots of sheep and horses enjoying the delicious grass in the pastures and nice, chubby ducks happily swimming in ponds and lakes. There were so many great places to go walking, with many established trails.

I arrived at Gjogv, my destination for the night around 6pm, so just in time to check-in to the cozy guesthouse and enjoy a delicious meal of local lamb in their dining room.

Gjogv, which means cleft or ravine in Faroese, is situated on a large – you guessed it! – cleft in the cliff along the coast. A very steep ramp with tracks allows boats to be pulled up to the village or lowered down to the bay. Such a picturesque place and the little town is lovely, with colourful houses, many with grass roofs. I was actually able to watch a couple of men mow their roofs, which sounds funny and looks even funnier! Many people put sheep or goats on their roofs to keep the grass trimmed.

I went for a gorgeous hike out into the countryside with spectacular views down over the village and the shoreline. I came to the conclusion it really is impossible to find an ugly view in this amazing country.

Soon my time in these beautiful islands was over and it was time to drive to Vagar Airport to drop off my rental car and catch my flight. This place is so natural and unassuming, there were even sheep grazing on the grass right beside the pathway from the parking lot to the terminal building. They were totally uninterested in all of the people passing by!