A Game of Thrones Tour in Ireland | The Great Canadian Travel Co.
Skip to content 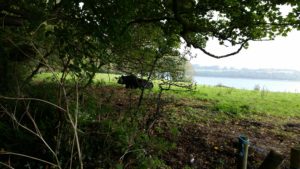 During my recent trip to Ireland, our first activity was the Winterfell Game of Thrones Experience at Ward Castle and Demesne. I confess that I had my doubts about this situation. I have never watched even two minutes of Game of Thrones, and thought that part might be boring, although I was looking forward to the archery. The entire three hours from the airport to Strangford (including stops), I kept wondering, ‘Who came up with this terrible idea?!’ I thought that arming 20 sleep-deprived and jet-lagged people with bows and arrows was an utterly bad plan. However, I was completely wrong. It was a great ice-breaker for our group, who hadn’t met before we landed in Dublin. It was also a lot of fun. Our guide William was thoroughly entertaining and informative. He explained how it came about that Game of Thrones used Ward Castle and Demesne for shooting parts of the show, and took us around the grounds to point out areas that were used in the filming. He knows many details about the show and was able to tell us exactly which scenes were filmed there. 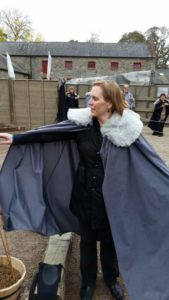 After our tour, we donned period costumes used in the actual filming of the show. We then lined up to take our turns at archery. William gave us a lesson in how to shoot the bows and arrows, but I am positive he intentionally misinformed us. Well, that’s my story and I’m sticking to it. I am by no means an experienced archer, but I’ve tried a few times before and didn’t think I could possibly be that bad. I’ll chalk it up to lack of sleep. After our hard work, we refreshed ourselves with a bottle of Winter Ale.

Approximately 80% of Game of Thrones was filmed in Northern Ireland, so it’s a fantastic place for fans to visit. The archery experience is only one of the activities offered at Ward Castle and Demesne, and there are tours in other parts of Ireland as well. If I found this experience exciting and so much fun, fans of the show would be thrilled with it. I nearly had my head chopped off for being such a bad archer, but I was granted clemency at the last moment. I lived to tell the tale, but others on Game of Thrones have not been so fortunate.