Helsinki – A City of Romance and Steam | The Great Canadian Travel Co.
Skip to content 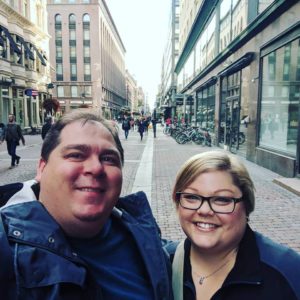 Written by Martyn Cook with the help of Shauna Cook

Arriving at the airport, we head down the gangway. We are surrounded by light coloured woods and open windows that let daylight in. As we pass by these portals into the outside world, the landscape has changed since Iceland. The stark black rocks, lichen hung cliffs, moss and sub-Tundra plants of Iceland are replaced with trees as far as the eye can see. We blearily wander to the baggage pick up. Standing there, we watch people move to and fro in a chaotic choreographed dance, dodging and weaving between each other. The language is foreign, as Icelandic is to me; though far enough removed from influence by its neighbours to baffle me. Spending much of my time referencing Icelandic names and places, it shares a common root. Finnish is just beyond comprehension to my ears in theory and practise.

We head to the taxi line, with our baggage successfully retrieved. Hopping into a cab, we exchange the usual pleasantries with our driver. Then he asks us where we are from in his broken English, hats off to him though, as his English is leagues better than my Finnish. “Winnipeg”, we state proudly, cautiously optimistic he would be able to identify where it was. There are few Finnish celebrities known through the world, four come to mind: Kimi Raikkonen; Mica Hackenen; The Finnish Flash, Teemu Selane; and the bright new Finnish star, Patrik Laine. Well, it seems he is related to Patrik, what a coincidence. Even enthusiastically showing us his taxi ID showing he shares the same last name, Laine. He sure did know where Winnipeg was. We now shared a bond, we talked hockey the entire ride; understanding how they meet through ice hockey, the love for the game. He talked about his childhood and how he was going to be a hockey star. 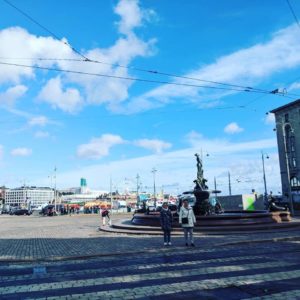 As we talk, the look of the houses changed from the airport’s ultra modern Scandinavian look. They now look very reminiscent of eastern block architecture; more function than style. They have not been painted in many years, other than by the street artists whom have added their own mark on the world. The driver explained that Helsinki is many cities that make up Helsinki proper. not even delineated by signage in some cases. One moment you are in one, the next another, then right to another. The buildings now start to gain in height as we approach the edge of Helsinki’s downtown. The squat eastern block houses giving way to amassing sky scrapers of glass, and clean lines; from three-story buildings, now the buildings soar. Kids scoot down the street on bikes or scooters. The feeling we got was of a safe city, no need to be on guard or on edge.

The sky scrapers are mixed amongst old historic buildings, stone buildings with character and detail just not seen anymore. Old cobblestone roads zigging this way and that. Our driver careens onto trolley tracks built into the roadways. My eyes widen but he assures us that he is allowed to do this. We surrender our fears, as he is the professional. He turns on to a street that looks like it should be pedestrian only. Rolling down the window to yell at someone in Finnish on a bike, then realizing they only spoke English, switches to yell at them in English about riding the bike on the road, a road we did not think our driver even belonged on.

Our driver looks like a more weathered, well-fed version of Liam Neeson. So, we just stayed silent, as he may have a “particular set of skills”, we really did not want to find out about the hard way. The Finnish people are very stoic, and our driver revealed that Finns don’t talk to strangers. Accepting this, we changed our expectations accordingly.

We arrived at our destination. The block was a Tokyo, meets Scandinavia; perhaps best described as a Tokyo that does not talk to strangers. Our room was directly across the street from the mall where bright billboards would illuminate our room for the remainder of the stay. Modernism would stand starkly in contrast to the cobblestone streets.

We quickly get squared away, the hotel exceeding our expectations. We head down to the harbour, but not before making a stop at Burger King for lunch. It’s always nice to see how North American ideas are adopted and executed aboard. It is one of my guilty pleasures in life: a Whopper, no tomato, heavy all, side of onion rings and a refillable soda. It’s the little things in life. After packing that away, we head down to market square, moving slowly, feeling gluttonous from our BK. Booths line market square selling handmade and throw away souvenirs. Fruit stands filled with berries, and stands serving local butter-fried fish with mashed potatoes. The stands fill the square with energy. Clouds were puttering away in the sky as the sun makes its decent for the horizon. We head to the JTLine booth to board a ferry to Suomenlinna, passing beautiful sculptures and street performers along the way. We board the top deck of the boat bound for the island sea fort of Suomenlinna. The battlements stand defiantly against the Baltic Sea. 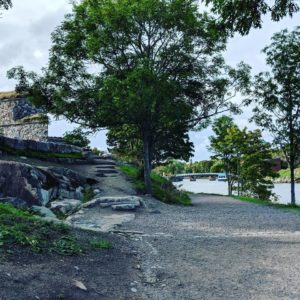 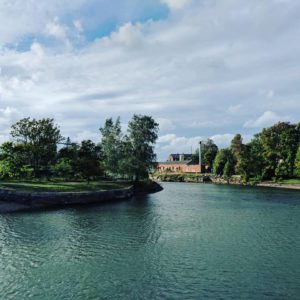 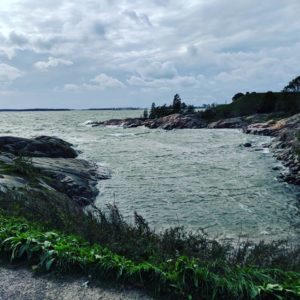 The wind has started picking up, and I pull my mother’s hand knitted cardigan up against my face, blocking the wind and my rain jacket over top to cut the winds assault. We arrive at the fort and are met with a towering citadel. We check out the map and prepare our route. My first stop in the drydocked submarine. With an entrance fee of seven Euros paid, I am allowed aboard. My enthusiasm is way more than that of the Finnish female who took my entrance fee. I gain entrance in the forward port hatch. To my left, torpedo tubes and bunks. To my right lay the bridge, galley, and engine room, followed by the rear bunks and toilet.

Thrilled with my little experience, I rejoin my bored wife who was sitting outside. I spot on the map the canon batteries, and we make our way there. Climbing to the top of the canon line, the wind is whipping. We do not stay longer than taking in the views which are stunning. We see abandoned gunpowder stores all with the doors open, but we were too afraid to go inside. Yes, I am scared of ghosts, but more so of vagrants. We work our way to the other ferry pick up point at Kings Gate, as not to miss the last ferry. I could have spent the entire day going about the military history of the place and hearing the stories. Our time on the island must come to an end, back to terra firma.

As we arrive back to port, we see the market has packed up for the day. It being September, tourist season is over, things operate truncated hours. One place stays open, Kauppatorin Grilli, which we had spotted before going on the ferry, so we were excited to try its exotic fares. With money in hand, and bravery in our hearts we order. “One reindeer hot dog, moose meatballs, and a side of fries.” What to expect? The food came, we went in to the tent set up for eating and none to soon, as the heavens opened. Rain pelting down, tourists flocked to our little tent while we ate. The food was delicious and rather more pedestrian (thankfully) than expected. 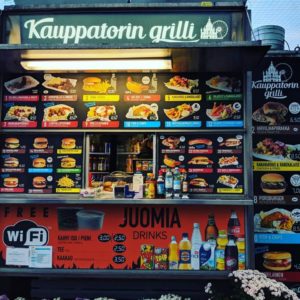 The rain stopped as we intertwine our hands and have a romantic stroll back through the old town. With our bellies filled and our hearts soaring like the moments when we first fell in love, we retire to our hotel, in awe of what Helsinki has awakened in us. A rare moment of reckless innocence has left our hearts bare to remember what travel gives as gifts. It takes money in exchange for priceless moments. Final sale, no refunds will be given.