Now That’s How to Go “Postal”, In the Very Best Way! | The Great Canadian Travel Co.
Skip to content

Every now and again I read something that makes me say “H’uh? Really? Wow!”, and this story was one of those.

Posted by Yahoo Lifestyle based on a posting to Reddit, it’s about a tourist that drew a map on an envelope in lieu of an address to a remote farm in Iceland, and it actually got delivered!  https://www.yahoo.com/lifestyle/tourist-drew-map-postcard-lieu-195106212.html

“I don’t know if it’s the fact that I’m easily entertained or that this is really, really freaking cool, but check this out! A Reddit user uploaded a photo of a postcard that was successfully delivered in Iceland. Big deal right? WELL, the sender actually had no idea what the person’s address was, so they drew a map instead and hoped for the best. 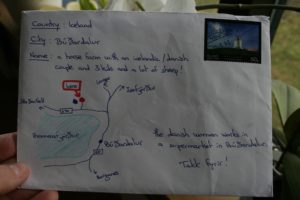 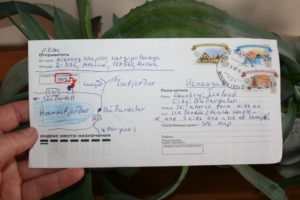 Aside from this being pretty incredible on its own, if you scour through the comments, you’ll find out that this is actually a pretty common practice in other countries. I legit thought I was pretty much the only one who gave directions like, “Turn right at the big oak tree, go like, 3 streets, you’ll see a small coffee shop with outdoor seating and one umbrella, go past that for the time of a standard Bon Iver song, make a slight right at the pink house, I’m the fifth apartment back.”

According to user msleepd, they basically had to do the same thing when mailing something to Managua, Nicaragua: “I once mailed a letter there, with essentially a paragraph describing the location. Basically went something like ‘From the school, make a right. Go past the third street, which has a big avocado tree, then make a left (if you’re past the street hump you’ve gone too far). Make another left. When the road is paved make the first right, then left. The house is one story, red and has a guard from [guard company] stationed outside.’”

Pretty cool if you ask me! Next time I mail a letter, I might just draw a map on the address line and hope for the best!”

“There are many stories of messages in bottles travelling thousands of miles before being picked up and read, and letters arriving decades after they were posted. But here is a different twist.

Rebecca Cathrine Kaadu Ostenfeld was reportedly surprised when a letter was delivered to the horse farm where she lives with her husband and three children near Búðardalur in the west of Iceland.

Instead of a postal address or a recipient’s name, the sender had drawn a map of where they believed the farm to be, together with the following, in English:

“Country: Iceland. City: Búðardalur. Name: A horse farm with an Icelandic/Danish couple and three kids and a lot of sheep!”

The sender had also added a further clue to the intended recipient: “the Danish woman works in a supermarket in Búðardalur.”

The letter had been written and sent from the Icelandic capital Reykjavík by a tourist who had stayed at the farm but who obviously did not know the address.

And, extraordinarily, it arrived at the right place.

This astonishing delivery took place in March and was then not reported until May, when it came to attention of local Icelandic news website, Skessuhorn which noted “anything is possible in Iceland”.

The story has now, belatedly, gone viral on social media after a photo of the envelope was posted on Reddit. The picture has prompted readers to share other miraculous postal stories; such as the tale of the Christmas card sent from Germany, which somehow arrived at the right place despite only being addressed to “England”.