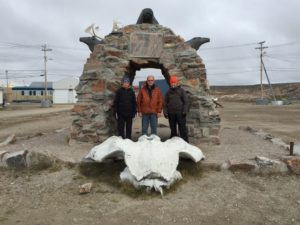 Wow. You can see and do a-lot of things when it is light out for  24 hours in the day. We have had a marvellous day of meeting, sharing and being involved in the community. I have never been so warmly welcomed by so many people. The kids are so keen on knowing what your name is and why you are there. By the way, I wrote this note at 11:35 at night after having just come in from playing soccer with some kids. We actually heard the kids’ laughter into the wee wee wee hours of the night.In 24 hours we had snow, rain, sunshine, and windy windy winds. We could only hope it died down for our camp out on the floe edge on Saturday.

We visited a bowhead whale graveyard. I cannot even fathom harpooning them in small boats; a 70 foot, 70 tonne beast swimming beside you would be incredibly scary. Our next stop was supposed to be a town barbecue and celebration, but those were cancelled because of the winds.  So we were lucky enough that the chef in the kitchen made us delicious caribou stew and 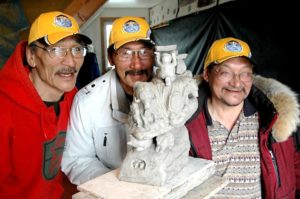 bannock. The Arctic Char for dinner was an added bonus.

We had hired some locals to share with us some of their many talents. So our afternoon was filled with drum dancers, singers, meeting Paul Malliki (the world renowned carver) and visiting his dog team. An added bonus was stopping at our guide (Jerry) father’s home and him showing us his shed full of furs. Jerry, like every male up here, is a hunter. He has lived here his whole life and has some incredible stories to tell. None of us could fathom how anyone could stay warm. So Jerry showed us the stunning clothing that has been made from skins and hides of the animals. The weather dictates what fur you wear; everything from polar bear, wolverine, seal, caribou, to musk ox is worn.

We hiked out to a Thule peoples site where artifacts from 4000 years ago have been found. It was an amazing sight to see. We also toured the new high school that has been open for just over a year.

I always say that the best part of my job is sharing in peoples “wow” travel moments. This trip did not let me down. Wows have been heard many times.

When I finished this note, it was 12:15am and the children were still playing soccer.

So much to do in 24 hours of sunlight.