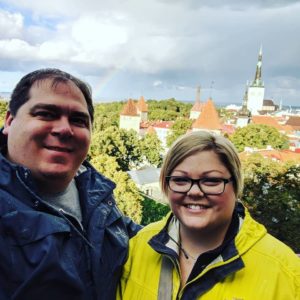 Written by Martyn Cook with the help of Shauna Cook

Tallinn in Estonia. What is there to say about it, that’s not already been said a million times. Oh you have never heard of it? Don’t worry, I had not either. At this juncture in time you need to make me a promise. Promise that you will go there, share no photos, and tell no one. Let’s keep this beauty to ourselves, it will be our little secret. So we can keep going back over and over again maintain its splendour, without our fellow compatriots overcrowding it. 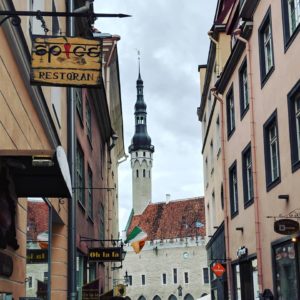 When my wife told me I was going to Tallinn, my reaction was. “Where?”. She told me a few Instagram people to follow and check out the photos. Let me tell you, even the photos do not do it justice. A fortified old city stands, bold faced to change. No stores have been retrofitted to incorporate the original facade. No North Face store or H&M are found among the old city, just souvenir shops after souvenir shops, with old ladies sitting knitting or having conversations. There is a sense of distance and apprehension to strangers. Who could blame them? They have been occupied eight and a half times (once they defended themselves so they consider that a half occupation). The people make the place; once you do get into a genuine conversation with someone here, they are warm and kind with a wickedly dark sense of humour, often making fun of the amount of times they have been occupied. They also know who they are and now stand up for many social and political events. They are more aware of the running of their country and the is a strong sense of nationalism. There are flags and monuments everywhere and the city itself feels safe, even at night time. What more do you expect from a country that has a person so fanatical about Depeche mode that they opened a Depeche Mode only bar… which was amazing by the way. This city surprises you even when you were already surprised. 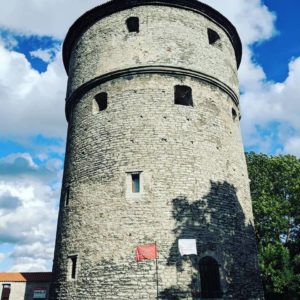 As we leave the lower level of the city, heading past the most hated monument in all of Tallinn, the War of Independence Victory Column in Freedom Square, we climb the stairs that brings us to the name of the tower that encompasses their humour and outlines the important things in Estonian culture. Kick in the Cock, is how it is pronounced in English – it’s actually Kiek in de Kök and it means “to look in the kitchen”. Food is very much a big part of the culture here; the plazas are filled with patios and street vendors are not at a shortage. Smells are as much of the experience as sights and sounds.

Proceeding up another tier of the Citadel, we pass by statues and an archery range. Yep, that is not a typo, an archery range. I love archery, not being able to have a range in my backyard due to size and safety concerns was a let down. This is my kind of place, but I had to chuckle though, as no one was using. My mind went to the people who do use it and the fact it exists means there are people knocking about with quivers full of arrows and a bow getting on buses or biking here. Perhaps they’d drive, but that’s less funny. Or perhaps they are equestrians, and rock up on a horse. Past the archery range, we come face to face with another set of stairs. As I look to the heavens for the answer to my query of why must we go up more stairs, we are provided the answer. A striking spire comes in to view, gold emboldened murals beacon us to come hither. Mounting the summit of the stairs, we are face to face with the Alexander Nevsky Cathedral. A grove of trees stands out front, like most of the people who can not pull themselves away from the beauty of it. 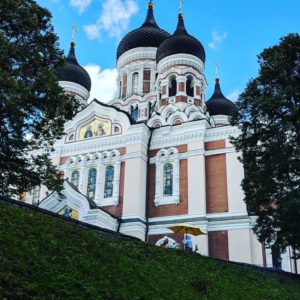 hear about the controversy surrounding the Cathedral, and then break away from our tour group. We steal ourselves away, taking time to sit in the grove of trees, to take a deep breath and take in the moment. Conversations from others slipping away as we take in the beauty, living in the moment. The sun breaks through the limbs of the trees. We talk about the beauty of the places we have been, but all I can think of is this moment. The cobblestone streets, the history of this place. People filter in and out of the door of the church. Some sombre, some smiling. All moved. We move on with our group, the guide is talking about the Parliament as we weave through the tiny streets. Cars occasionally break up the tour’s flow and send participants slowly scrambling. A drop lands on my hands, then another. I look up, the droplets are tiny dark gray dots on the light gray canvas. The rain comes. I quickly pull my hood up tight on my head. People scramble under trees, souvenir shops now turning into shelters from the rain. We scamper under an archway. Still in the moment we wait, watching those around us.

The rain lightens and we march on, we bring up the back of the group to the next spot. We turn the corner as people settle in we stand at a magnificent view point. The city lays before us; the sea keeping the city from sprawling. The tips of trees fill in the spaces in between. From the horizon a rainbow sprints towards the heavens. Captivating our attention, and smiles fill out visages. We take in the moment and stretch them for as long as we can. We make our way down a long switch-back stairway from the Citadel down to the lower city, stopping intermittently to take in the view.

In the park, children mimic the town workers who are cleaning up leaves. The children use discarded branches as rakes and emit squeals of joy. A smile crosses my face. We retire to the hotel for a spell to let this wonderful day linger in our thoughts. 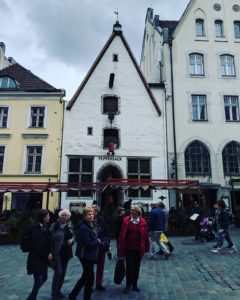 The night sets in as we embark on our journey to tonight’s dining establishment. We wind through the street talking about facts of the previous periods of occupation the city has seen. Talking about the bombing down the road that was filled with blacksmith shops. We stroll hand in hand to Peppersack, our dinner venue. We heave open the heavy wooden doors and enter into the large dining hall. Two ladies in history period clothing greet us and escort us to the furthest table on a balcony overlooking the Great Hall. This restaurant holds a secret though… a dinner show.

A scuffle breaks out, the sound of a sword being brought forth from its sheath rings about the noise of the great hall. A man in period clothing standing on the stairway shouts at another man. The man being yelled at has his face buried in the nape of the neck of our waitress. Turning, he draws a blade of his own. They fight up and down the stairs like 200 pound cats. The fray goes back and forth until a victor emerges (I won’t spoil the surprise). Normality is restored, and dining once again commences. Picking up steam like a locomotive, the noise elevates. Our server warms up to us as we enjoy our meal. Spending more time in Scandinavia and the Nordic countries, the encounters we found uncomfortable at first, we know now that patience and friendliness brings them out of their shell.

With our bellies full, and entertainment had, we leave Peppersack and emerge onto the cobblestone streets; the street lights casting long shadows. We enter into the centre square where patios line the edge, under a watchful eye of a tower from the church in the centre, like a father watching over his kids from getting to out of hand. The clouds pass by the spire and we are treated to a light sprinkle of rain. It seems the motto we have had since we arrived in Tallinn is “it’s sunny, let me just grab my rain jacket.” Somehow the rain made it better. If you are prepared for a rainstorm, as people run for shelter, you are left to your own devices, it allows the fun to continue. We meander forward just two romantics walking down a lamp lit cobblestone road, nothing to see here. Tallinn leaves us as befuddled, if not more so than when before we arrived. We came in with a perception of what it would feel like; I thought it would feel like this, or that, it does not. It feels historic and unapologetic. It says accept me for what I am in this moment, not what I was or what I will be. It is honest and bares all. Like its people, it takes time to warm up to you and when it decides to let you in, you won’t want to leave.