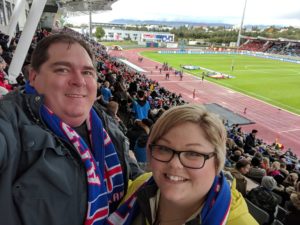 Attending a sporting event can be an exciting time. Especially when you get to see a team or athlete you really like, in their home country while you are there.  This happened to me when I was in Iceland recently.  I really enjoy watching the Icelandic Football team play and following their careers.  I had a trip to Iceland planned for several months, and about 2 weeks before I was set to leave, it was announced that the Icelandic team would be playing in Reykjavik on the only night I was booked to stay in Reykjavik!  It couldn’t have worked out better! 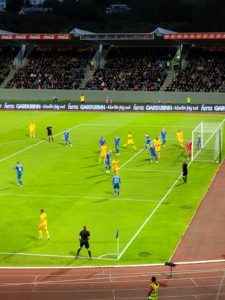 I found myself online the day the tickets went on sale hoping to snag two tickets … I didn’t care where the seats were, and (to an extent!) how much they cost, I just wanted to be there.  I was relieved when I was able to get myself 2 tickets.  Yes, they were in the very back row of the far corner section – but I was in!

Fast forward to game day and it was a cool, rainy, drizzly, sunny late summer day in Iceland and I checked into my hotel in Reykjavik.  I was pleased to find that I could actually SEE the football pitch from my hotel room, and I later found it only took about 6 minutes to walk there.  We put on our newly acquired Áfram Ísland football scarfs and set off with the thousands of others on foot to the field.

On arrival, we weren’t surprised that as non-Icelanders we were in the minority but were pleasantly surprised to be welcomed with open arms!  Icelanders are not known for being warm and fuzzy, but when you factor in their star National team, it was a different story all together.

We found our way to our seats (with some help since our tickets were in Icelandic) and enjoyed the game.  Unfortunately, Iceland did not win, but you wouldn’t know it, the fans were incredible shouting their chants through the whole game and doing the now famous ‘Viking Clap’ on more than one occasion to support their boys.

Attending this game is something I will never forget, it was truly a once in a lifetime experience for me.