Out on the Tundra in Churchill | The Great Canadian Travel Co.
Skip to content 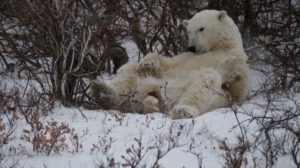 “Sssshhhh, turn around quietly and look out the window.” Those were the words said in hushed tones by our tour host as we were happily sitting in the lounge car of the Tundra Buggy Lodge™, having a wee drink before dinner. We turned and looked in awe, as right outside the windows, casually strolling by in the tell-tale pigeon-toed gait, was a big, beautiful polar bear. You could hear the intake of breath as we all marvelled at the incredible wonder of nature walking right by us. “That’s a young male, about 3 years old” our guide informed us. His powerful muscles rippled underneath his fur telling us that he is a force of nature, a natural hunter and predator. But the round, black eyes and black nose set in that white face offered all of us that unmistakable sense of “Oh, you look cute enough to cuddle”. A feeling best kept as thought and not action! These are not cute and cuddly toys! 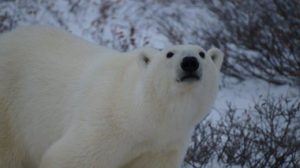 The next day we set off out onto the tundra in the Wildlife Management Area just outside of the town of Churchill to look at the varied wildlife that calls this place home. The way the wildlife is treated in this area is really impressive and very respectful. There are set trails that the Tundra Buggy™ vehicles travel on, trails that have been in the area for hundreds of years left by local Inuit people as well as Hudson Bay Company carts and, later, military vehicles from the base that used to be located in Churchill. All of the drivers are very careful to stick to the pre-set trails and adhere to the guidelines set out for the area. Never is an animal or bird chased, called out to, or enticed in any way to come closer. And they are never fed. Our Tundra Buggy™ driver informed us of these rules right at the start, stating emphatically that it’s critical we do nothing to habitualize the animals to human interaction. The vehicles are relatively quiet for such large machines and the bears appear to not even notice them (or might give a cursory glance at most). That said, sometimes the more curious, mostly young, bears might come close to the vehicle to have a look at the people onboard, but they don’t seem at all stressed. They just seem really curious. I wonder if they’re thinking we look cute and cuddly or possibly that we’d be a nice snack before the seal hunt can begin? 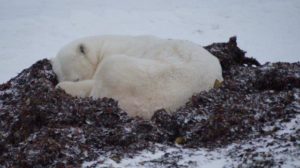 We spot several bears, some slowly padding their way across tundra, over frozen ponds and through willows. One had formed a bed in a pile of kelp that the high tide and wind had brought in and was curled up in it, cozy with its nose tucked under a front paw. Our guide told us this was an older, male that was confident enough to have a sound sleep. Younger males and females of all ages have to be wary and sleep with one eye open, on high alert, for roaming adult males that can attack and kill a smaller bear. Later we saw a young, female bear playing in the snow right at the edge of some willows. The vehicle stops at a distance and the engine was shut off. We sit in silence, with only low whispers being exchanged amongst us (mostly about camera settings), as we watch her roll around in the fluffy snow; gnaw on willow branches, break them off and throw them up in the air and catching them – it seemed she wasn’t too tired to have some play time, and we were delighted to silently watch her antics!  After awhile she dug into a snow drift and nestled in it for a nap. 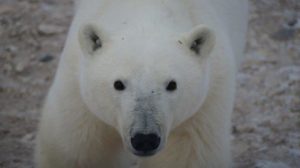 After seeing the respect shown to the wildlife in this area by the companies operating the buggies and the tourists onboard and hearing the comments made by the people on our group, I think that the experience of seeing polar bears in the wild (rather than habitualized bears in a zoo) is critical to us connecting with them in a real and meaningful way. It allows us to have a personal sense of responsibility towards them and a better understanding of them. This can only help in efforts to stop the climate change that is so dramatically affecting them. Polar Bears International had an information session for us one evening and talked a lot about the bears and their habitat, threats caused to them and how we can help. They have partnered with Frontiers North, so this tells me that the disruption to bears and their habitat is so minimal it’s not even of a concern to this organization formed to protect them. Some people from our group donated to the organization or did the Adopt a Polar Bear program. If you’d like to help financially as well you can go to Polar Bears International website at https://polarbearsinternational.org/get-involved and click on Donate or Adoption.