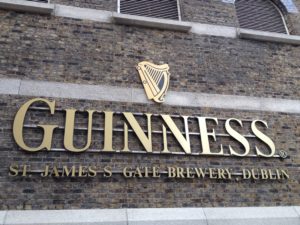 OK, well maybe not technically, but ask any true-blooded Irish person and they’ll tell you that “Yes, it makes a nice snack or small meal!”. And why wouldn’t it? It’s made of really good natural food stuff, all locally sourced.

It begins with barley sown and grown in Irish soil by farming families that span three generations of contracts with the Guinness™ company. The barley is malted behind the famous St. James’s Gate at the brewery in Dublin.

Then there’s the clear, cool water from nearby Poulaphouca Lake in County Wicklow, that gets mixed in with the freshly milled, malted barley. 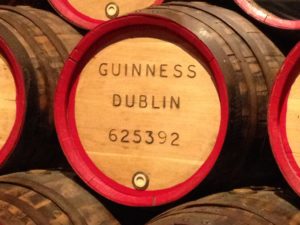 A whole bunch of stuff happens to the barley and water mixture, the most important of which is the roasting process at the exact temperature of 232F. This roasting gives the barley that gorgeous, brownish-ruby-red colour, a “black state of perfection” and what makes Guinness™ taste like Guinness™. A little bit smoky, a little bit sweet, a whole lot good!

Next come the hops, a plant that grows wild in many parts of Europe, that gives a distinctive flavour to the brew. It’s boiled together with the barley and water for about an hour and a half. Guinness™ uses twice the amount of hops most beers do, so there’s double the flavour! 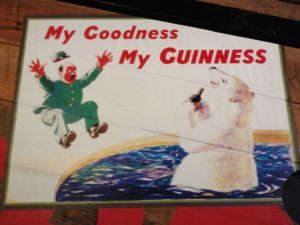 After that’s all cooled down and settled the Guinness™ yeast is added, a strain that’s been handed down through generations and is so valuable a reserve is kept under lock and key. The yeast gets the beer to ferment and perfectly pick up the full freshness and flavour of all the other ingredients. It’s this perfect fermentation that has made the flavour of Guinness™ famous right around the world.

After that, the brew is allowed to settle, mellow and mature, to develop it balanced taste and consistency. No point in rushing a good thing!

Once it’s ready to go, during the packaging process, nitrogen is added allowing every pour of Guinness™ to have the unmistakable and iconic creamy head. There has to be the right amount of bubbles in every pint – around 3 million, in case you were wondering.

Every batch of Guinness™ is tested by a Sensory Panel – yep, somebody actually gets paid to taste-test Guinness™. I know a few people that would call that their dream job! 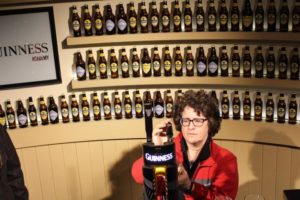 So, you see – barley, water, hops and yeast – Guinness™ really is a small meal in a glass!