Birds of a Feather Stop Over Together | The Great Canadian Travel Co.
Skip to content 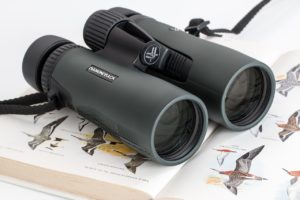 Stopping over in Iceland is a popular way to get a glimpse into what the country has to offer on your way to other destinations such as London or Amsterdam. It allows you to get that one extra stamp in your passport and although it’s not always enough time to explore as much as you want, it still allows you to say, yes! I’ve been to Iceland. But humans aren’t the only ones to use this North Atlantic island as a place to rest their weary feathers.

Even if you’re not a bird brain or a budding ornithologist, Iceland has some spectacular bird life that both live and stop over to eat, rest, and raise their brood. In no particular pecking order, here are some pretty amazing feathered friends you can find while visiting, or stopping over, in Iceland. 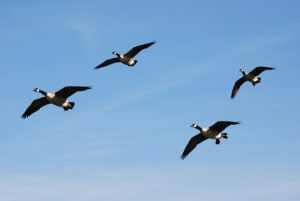 Bird migration basically happens everywhere in the spring and fall. In Canada, you’ll know that spring is on its way when you hear the Canada Geese honking above you (just don’t look up with your mouth open to look at them fly over your head…) Iceland is no different, minus the Canada Geese. They have a myriad of other bird species that use the island as their resting point between their departures and arrivals. Some just stop by to squawk a quick hello while others, well… let’s just say that Iceland provides them with their own special mood music and just the right lighting to make even Marvin Gaye blush – if you know what I’m saying…

Similar to the Plover is the Common Snipe, it is another essential summer bird in Iceland. It’s mating rituals take the cake when it comes to showing off. Males fly high in circles then take shallow dives to impress the ladies, producing a drumming sound through the vibrating tail feathers. This sound, is what makes this bird known to the Icelanders as the ‘Horse Cuckoo’, they call it the Hrossagaukur.

On the colder end of the year, once an Icelander spots a Common Raven (yes, the same one that caws at you from on top of a tree or hydro pole in Canada), it signals the beginning of winter. This noisy bird has a special place in Icelandic folklore and is believed to communicate warnings or promises, depending on its flight direction. The god Ódinn (the Father of all the Nordic gods) was apparently accompanied by two ravens, Huginn and Muninn. They are also fabled to have played an important role in settling the country when the Viking Hrafna-Flóki sent his birds (the ravens) to find land. 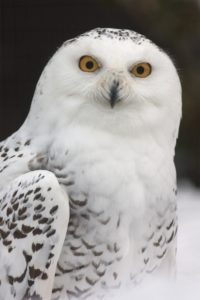 Snowy Owls are one of the most rewarding of all the birds to be seen here. Just like in Canada, it is elusive and very camouflaged. If you want to catch sight of one of these majestic creatures, you’ll have to go in the dark winter months, to the cold, remote reaches such as the East Fjords and the Highlands. Fun fact: as with most birds of prey, female Snowy Owls are slightly larger than their male counterparts. They have grey flecks in their feathers while the males are all white.

The Gyrfalcon, another bird of prey, is Iceland’s national bird. Icelandic Gyrfalcons are very unique and were used for trade with wealthy Europeans as far back as the medieval era – they were historically used in falconry.

The largest bird in Iceland are the White-Tailed Eagles, also called Sea Eagles. Their wingspan can reach two and a half metres. In the 19th century, these wonderful birds faced extinction, but with conservation efforts, they have successfully made a comeback in Iceland. There is even a White-Tailed Eagle Centre in the Westfjords to educate the public and discuss with them the conservation of this species.

The Arctic Tern also makes its way to Iceland for a longer stopover and has the second longest migration route of any animal in the entire world. They travel from Iceland to Antarctica round trip, every year. That’s about 80,000 km! Apparently they don’t need any vitamin D supplements in their diet because they see more sunlight than any other animal. But don’t get too close to one of their nests because you’ll likely get swarmed by all the nesting birds at once trying to deter you from getting any closer.

As for the shorter stopovers, the Knot uses Iceland in spring to gain strength before the last lag to Greenland or Northern Canada. But they like it there so much that they come back in the fall to rest again before their trek to Western Europe and North-Western Africa. They’ll stay a few weeks before heading off again. 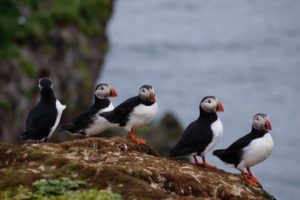 You can’t talk about the birds in Iceland, without mentioning the Atlantic Puffin (or Lundi in Icelandic). It’s the most common sea bird in Iceland as it is the breeding home for over half of the world’s Atlantic Puffins. They can be seen in Iceland all summer, from early April to September every year. The rest of the time they are out at sea, resting on the waves when they’re not swimming. They’ll look a little different out in the water in the winter as well, their beaks turn to a dull grey colour, but brighten in the spring/summer to the brilliant orange colour you see in pictures. Fun Fact: as a general rule, birds that look similar will mate for life. So a pair of puffins will be together until the end, sometimes even as long as 20 years!

So whether you’re looking at Iceland as just a quick stop over to say hello, like the Knot; or plan on staying a little longer, like the Puffin, Iceland has a little bit of mood music for everyone. So why don’t you join our feathered friends and take a trip to this magical island. Take a look at some of the tours we offer here. It’s not just for the birds!