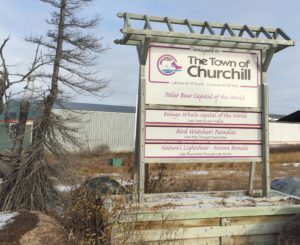 Churchill, Manitoba, Canada, is a town located on the edge of the Arctic that has a distinctive frontier town feel. It comes alive every time a new group of tourists comes to visit. The people are friendly, and the scenery is spectacular. The northern point of the Canadian Shield as the boreal forest ends and the Taiga begins is where this magical place resides, complete with snowshoe hares, ptarmigans, arctic foxes, snowy owls, and the majestic polar bear. 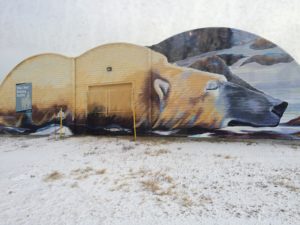 Polar bears are everywhere. The locals have them painted on murals and signs; have souvenirs and sculptures paying tribute to them and proudly print their images on t-shirts. The bears also occasionally wander into town. This is not new to either party – human or bear. Humans have learned to live in the polar bears’ home. They are very careful to not do anything that will habituate the bears, such as leaving food outside. Bears and humans live in careful harmony with each other.

According to everythingchurchill.com, there is evidence of human existence in the area dating back 4,000 years. In the 1920s, Churchill went from a remote outpost to a busy port when the Hudson Bay Railroad and Port of Churchill were constructed. Through much of the 50s and 60s, the town had a thriving military community, which closed down in 1980. In May 2017, rain waters washed away portions of the rail line from Gillam to Churchill, ultimately cutting off train access to Churchill. Churchill residents want to remind you that they are still open for business! You can still take VIA Rail to Thompson and then hop on a flight to Churchill. Or take one of the daily direct flights from Winnipeg. 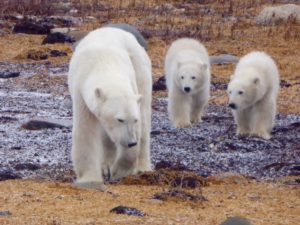 Out in the Churchill Wildlife Management Area (WMA), about 20 minutes from town, is where you’ll see the majority of the arctic wildlife. The terrain is in the subarctic transition zone, right on the shores of Hudson Bay. Churchill has the largest wildlife management area in the province, and one of the most important. This area protects the polar bear’s summer resting areas and maternity denning grounds.

There are only two companies with permits to go into the WMA. It is not allowed, and very unwise, to break this rule or to approach the bears. All the guides are trained on emergency bear measures and all rely on the bears and the tourism they bring for most of their livelihood. The vehicles used on the tours are white and blend in to their surroundings quite well. They strictly stay on pre-marked trails, leaving 99% of the tundra in the WMA undisturbed. The bears are not baited for tourists and the whole tourism community knows to leave the bears to their own devices and not habituate the bears. What better way to help a species’ survival than to learn as much as you can about them and their habitat?

Churchill’s economy now relies on its tourist industry – famous for polar bears, beluga whales, northern lights, Hudson’s Bay Company history and northern hospitality. A trip to this special northern frontier town continues to be an adventure for people from all over the world. If you want to help the people of this Churchill, go there, learn about their town, educate yourselves on polar bears and beluga whales. Not only will you be helping the community get through a rough patch, you will also be experiencing this adventure of a lifetime! 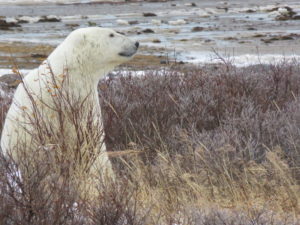 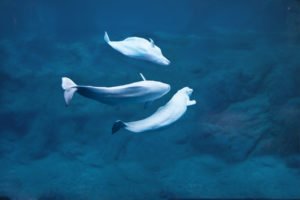 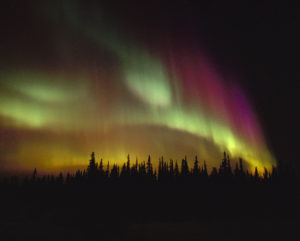